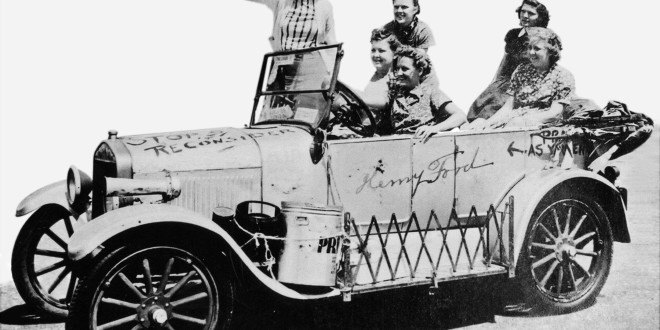 Long before Thelma & Louise rode off in their ’66 Thunderbird convertible, there were the Gypsy Coeds. In the mid 1930s and early 40s, this group of fiercely independent young ladies would pack themselves and a few belongings into Darlene Dorgan’s silver 1926 Model T Touring Car (dubbed the Silver Streak) and set off during the summers in search of adventure. 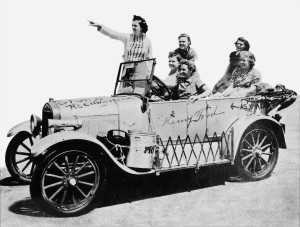 Darlene and various combinations of 19 other girls made eight trips, logged over 71,500 miles and found adventure at every turn. They met the reclusive Dr. Dafoe and watched the Dionne quintuplets play outside through a one-way screen. They attended the New York and San Francisco World’s Fair; met movie stars and moguls, dignitaries and corporate leaders; slept in parks, schoolyards, jail cells and by the side of the road; and formed a special bond with Henry Ford who hosted and assisted the girls on many occasions.

John Butte had heard stories about these trips from his mother (one of the Gypsy Coeds) and, upon her death in 2011, was determined to find the car. He tracked it to Portland, Oregon where Darlene’s descendants had taken it after it had sat in storage for decades at the Dorgan’s Bradford, Illinois home. John purchased the Silver Streak and brought it back to the Bradford area. Remarkably, the exterior had never been restored…and it still ran. Butte’s desire to preserve the car quickly evolved into preserving its history as well.

An exhibit entitled “Gypsy Coeds Ride the Silver Streak” was created by the Peoria Riverfront Museum and John Butte that tells the stories of the girls’ travels through 44 states, Mexico and Canada at a top speed of about 45 miles an hour. After its highly successful debut at the Peoria, IL museum last fall, the Silver Streak — along with pictures and fascinating information about the Gypsy Coeds and their trips — will be on display at the Model T Museum in Richmond, Indiana from April 9 to August 7, 2016.

The Model T Museum is open Tuesday through Sunday from 10 AM to 5 PM and is located at 309 N. 8th St., Richmond, Indiana in the Historic Depot District. It features an impressive collection of vehicles including one of the first Ts and one of the last, a Pietenpol airplane, T-related memorabilia, reference materials and an extensive gift shop which includes copies of John Butte’s recently released book, “Darlene’s Silver Streak and The Bradford Model T Girls.” For more information call the Model T Museum at 765-488-0026.

I play on the radio from 7 am -1 pm weekdays on 98.9 FM WYRZ and WYRZ.org. Follow me on twitter @WYRZBrianScott or e-mail me at brian@wyrz.org.
Previous Construction on Avon Ave to begin April 4
Next Bridge Rehabilitation Project will Restrict US 36 west of Avon beginning the first of April