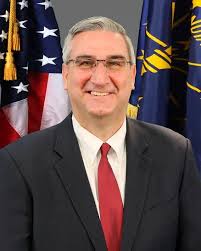 INDIANAPOLIS – Governor Eric J. Holcomb today signed an executive order naming Interstate 865 after Fred M. Fehsenfeld, Sr. in recognition of his service and contributions to the State of Indiana and the nation as an entrepreneur, decorated military veteran, and community leader.

Mr. Fehsenfeld is a lifelong Hoosier and founder of The Heritage Group in Indianapolis, which is involved in energy sales and marketing, environmental services, chemical refining, and more—in Indiana, across the nation, and worldwide.

Beyond his military service and business success, Fred Fehsenfeld, Sr. throughout his life has supported innovations in the energy field, including establishing the Fehsenfeld Family Head of Environmental & Ecological Engineering and the Purdue Energy Fund at his alma mater Purdue University.

Interstate 865 is the east-west connector between Interstates 65 and 465 on the northwest side of Indianapolis. The Indiana Department of Transportation has marked the highway with signage designating it the “Fred M. Fehsenfeld, Sr. Highway.”

I play on the radio from 7 am -1 pm weekdays on 98.9 FM WYRZ and WYRZ.org. Follow me on twitter @WYRZBrianScott or e-mail me at brian@wyrz.org.
Previous Cloud-Based Tech Firm Growing in Hamilton County, Doubling Employee Headcount
Next Dates set for Brownsburg Taxidermist ordered to return property of customers