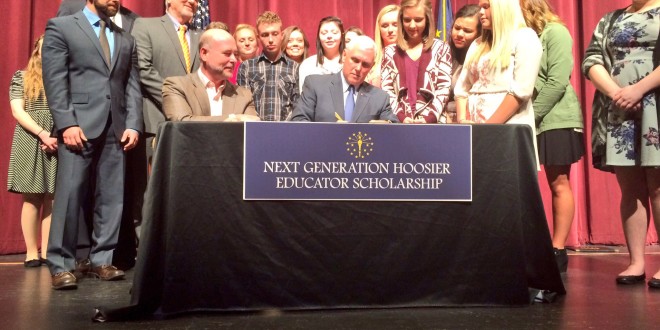 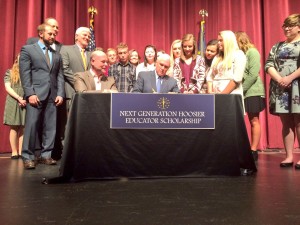 Indianapolis – Governor Mike Pence today joined Speaker of the House Brian Bosma (R – Indianapolis) to ceremonially sign House Enrolled Act (HEA) 1002, which establishes the Next Generation Hoosier Educators Scholarship fund. In the fall of 2017, top-performing students who commit to teaching in Indiana for at least five years, could receive up to $7,500 per year to cover college tuition as they pursue their degree. The Governor signed HEA 1002, which goes into effect July 1, 2016, into law on March 22, 2016.

“This bipartisan initiative encourages our best and brightest students to consider teaching in Indiana classrooms as a lifelong career,” said Governor Pence. “I appreciate the efforts of Speaker Bosma and the Indiana General Assembly in moving this measure as we look to attract top-performing students to the teaching profession in Indiana.”

Under the Next Generation Hoosier Educators Scholarship program, eligible students will receive up to $7,500 per year to cover tuition, provided they commit to teaching in Indiana schools for at least five years. Eligible students must have graduated in the top 20 percent of their class or received a score in the top 20th percentile on their SAT or ACT exam. After receiving the scholarship, students must maintain a grade point average of 3.0 or higher and be enrolled in at least 15 credit hours per semester.

The law caps the number of scholarship recipients at 200 students per academic year. A single recipient cannot receive more than $30,000 total.

A photo from today’s ceremony can be found attached. For a full list of bills Governor Pence has signed, visit Bill Watch: http://www.in.gov/gov/2016billwatch.htm.

I play on the radio from 7 am -1 pm weekdays on 98.9 FM WYRZ and WYRZ.org. Follow me on twitter @WYRZBrianScott or e-mail me at brian@wyrz.org.
Previous Three Teens Arrested in Connection with Hendricks County Bank Robberies
Next Lt. Governor Holcomb Announces Downtown Enhancement Grant Recipients