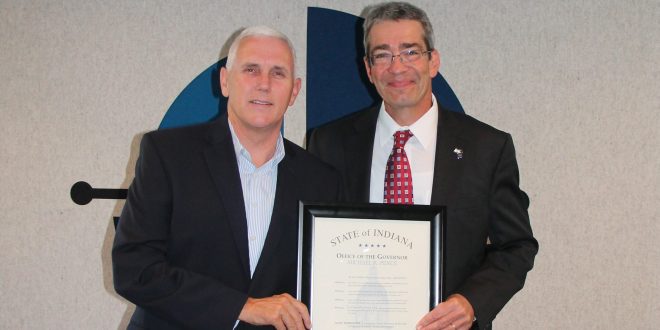 “Israel and Indiana share many common bonds that Hoosiers cherish,” said Governor Pence. “As our nation’s strongest and most important ally in the Middle East, Israel is also a key partner in our state’s continued economic growth, which is why were proud to welcome Israeli business leaders to Indiana. Hoosiers and Israelis are linked by our self-reliance, determination and entrepreneurial spirit, aiding us all in collaboration to grow our economies and create more great-paying jobs.”

The Indiana exchange was the first stop as part of an Israeli economic mission to the United States. Focused on strengthening global cybersecurity, the conference brought together leaders on Monday from nine Israeli businesses, 29 Indiana businesses, the Indiana Economic Development Corporation (IEDC), Elevate Ventures, the city of Indianapolis, Indiana University and Purdue University. Throughout the day Israeli business leaders learned about doing business in the Indiana, networked with Hoosier businesses and visited leading Indiana cybersecurity companies.

Both Indiana and Israel have established themselves as global leaders in the cybersecurity field. According to Israel’s National Cyber Bureau, Israel develops 10 percent of global security technology, with security software sales topping $60 billion in 2014. Indiana, meanwhile, is home to leading cybersecurity companies including Rook Security, Pondurance and Kinney Group.

In April, Governor Pence signed an executive order creating the Indiana Executive Council on Cybersecurity. The council, which is a partnership between public and private organizations across the state, is designed to keep Indiana safe from global cyber threats and to provide increased opportunities for cybersecurity companies and experts to work in Indiana.

“Israeli businesses today are global leaders in cybersecurity, an industry growing in one of the world’s top entrepreneurial hotspots,” said Victor Smith, Indiana Secretary of Commerce. “While Israelis are developing new and advanced strategies for addressing constantly evolving threats, Hoosiers are also leading top cybersecurity initiatives that are deployed at some of the top businesses around the world. By bringing everyone together in one room, Hoosier and Israeli cybersecurity leaders built relationships and shared ideas, which will help the industry grow and add more jobs here at home.”

The visit was part of Indiana’s continued efforts to strengthen its relationship with Israel, following last year’s Indiana-Israel Business Exchange, which focused on security and defense. Governor Pence led a jobs and economic development mission to Israel in 2014, where he met with Israeli Prime Minister Benjamin Netanyahu, as well as leaders of several Israeli companies. A delegation of Hoosiers led by Indiana Secretary of Commerce Victor Smith also participated in an economic development mission to Israel earlier this year, with state leaders attending CyberTech 2016, the world’s second largest cybersecurity conference.

Trade between Israel and Indiana has experienced strong growth in recent years. Export of Indiana-built goods to Israel has more than doubled in the last decade, reaching $73.1 million just last year. Today more than 70 Hoosier companies do business in Israel, most recently with Israel-based auto supplier Omen Casting Group announcing in January that it is locating its first North American production facility in Richmond, Indiana.

I play on the radio from 7 am -1 pm weekdays on 98.9 FM WYRZ and WYRZ.org. Follow me on twitter @WYRZBrianScott or e-mail me at brian@wyrz.org.
Previous Celebrate Park and Recreation Month with a Selfie
Next Coats Votes to Fund Zika Response, Veterans Programs