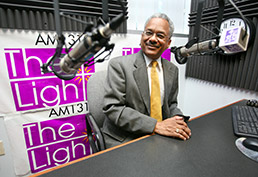 Indianapolis – Governor Mike Pence today posthumously named Amos C. Brown III the 2015 recipient of the Sachem Award, Indiana’s highest honor. This announcement comes following Mr. Brown’s untimely death at his family home in Chicago last Friday. Governor Pence is also directing flags at state facilities in Marion County to be flown at half-staff in honor of radio broadcaster Amos Brown on the day of his funeral, Saturday, November 14, 2015. He also asks businesses and residents to lower their flags to half-staff to honor the life and legacy of Amos Brown.

The Sachem, whose name comes from the Algonquin term given to leaders who exhibit wisdom, judgment and grace and whose character underscores the importance of moral example, is given annually by the Governor to Hoosiers whose life and character exemplify these qualities. Previous recipients include college basketball coaching legend John Wooden; the Reverend Theodore M. Hesburgh, C.S.C., president emeritus of the University of Notre Dame and world statesman; philanthropist Jane Blaffer Owen; and gospel music singing and songwriting pioneers Bill and Gloria Gaither. This is the 10th year in a row this award has been presented to notable Hoosiers. The Governor plans to present the posthumous award to the family of Amos Brown in the coming months. With this recognition, Amos Brown’s name will be enshrined in the Rotunda of the Indiana Statehouse.

“The Sachem is Indiana’s highest honor and is reserved to honor one Hoosier every year whose life and example enriched our state with wisdom, judgment and grace,” said Governor Pence. “Amos Brown was such a man and he will be dearly missed. For more than 40 years, Amos Brown used his extraordinary talents as a broadcaster and thought leader to serve as a passionate advocate for Hoosiers. The life and legacy of Amos Brown will leave an indelible impact on Indianapolis and our state. Amos used his voice as a platform to address some of the most challenging issues facing underprivileged and underserved Hoosiers. From education inequality, racial and socioeconomic issues, Amos Brown strived each and every day to improve lives. For all these reasons, I can think of no one more deserving to receive the state’s highest honor than Amos C. Brown III.”

Amos Brown was born in Chicago and earned his undergraduate degree from Northwestern University. He also received an honorary doctorate from Martin University in Indianapolis in 2006. Mr. Brown has been awarded several recognitions for his work on the radio and in his community, including induction to the Indiana Broadcasters Hall of Fame in 2007, a Sagamore of the Wabash, four CASPER Awards from the United Way/Community Service Council, the National Association of Broadcasters (NAB) Crystal Award for Community Service, and a four-time nominee and two-time winner of the Indiana Broadcasters Association Spectrum Award. He was also a two-time finalist of the NAB Marconi Award and has received the Heritage Place Lifetime Achievement Award, Indiana Civil Rights Commission Drum Major Award, Indiana Black Expo’s President’s Award, Indianapolis NAACP Humanitarian Award, the Mass Media Award and Director’s Award from the Center for Leadership Development, two Communications Awards from the Indianapolis Education Association and the Outstanding Leadership and Service Award from the U.S. Census Bureau.

Amos Brown began his radio career in 1976 as an advertising sales representative, and quickly rose through the ranks to station manager in 1981. He was the longest-serving African-American media manager in the Indianapolis market after serving 40 years in Indianapolis broadcasting. He also was the on-air host for Morning with the Mayor for 15 years, from 1977 to 1993. He launched his first daily radio talk show called “The Noon Show” in 1992 and in 1994, he transitioned to Hoosier Radio and TV, hosting “Six Thirty PM” and later “The Amos Brown Show.” In 2004, Mr. Brown became the host of the well-known “Afternoons with Amos” show on WTLC, in addition to his role as Director of Strategic Research.

Over the last 40 years, Mr. Brown has been an advocate for the Indianapolis community. He has worked with organizations such as the United Negro College Fund, Riley Hospital for Children, Mozel Sanders Foundation’s Thanksgiving Dinner, Indiana Black Expo, Indiana Education Roundtable, and Circle City Classic.