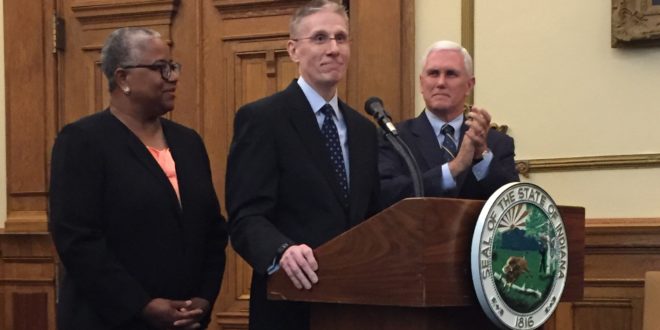 Indianapolis – Governor Mike Pence today named Geoffrey G. Slaughter as the 109th Justice to the Indiana Supreme Court. Mr. Slaughter will fill the vacancy left by Justice Brent Dickson, who, after 30 years on the bench, retired on April 29. His appointment will be effective on the day of his official swearing-in ceremony, which will be announced at a later date.

“I’m grateful today to announce Geoff Slaughter as the 109th Justice to the Indiana Supreme Court,” said Governor Pence. “Over his nearly 30-year career, Geoff Slaughter has demonstrated a first-rate legal intellect, an unparalleled understanding of constitutional and antitrust law, a remarkable ability to think and write clearly on the most complex issues, and a steadfast commitment to improving the local and legal community. I anticipate his service on Indiana’s highest court will be characterized by a fair and measured hand and a deep appreciation for our Constitution. I’m thankful to Chief Justice Loretta Rush and the Indiana Judicial Nominating Commission for their tireless work and countless hours spent to ensure the individuals brought to my desk bring to the Court the same commitment, intellect, and passion as former Justice Brent Dickson.”

A native of Lake County, Mr. Slaughter is currently a partner in the Indianapolis office of Taft Stettinius & Hollister LLP. There, he has represented clients in various types of cases, including prosecuting antitrust class actions, securities-fraud claims, environmental disputes, state and federal constitutional claims, land-use restrictions, and handling matters on judicial review from administrative decisions. He has argued numerous matters before the state and federal appellate courts.

Before joining Taft Stettinius & Hollister LLP, he served for six years as Special Counsel in the Office of Attorney General of Indiana representing the State in various court actions, was an associate at Kirkland & Ellis in Chicago, and clerked for Chief Judge Allen Sharp, United States District Judge for the Northern District of Indiana. While in private practice, Mr. Slaughter also served as Chairman of the Indiana Public Employees Relations Board.

Since 1996, Mr. Slaughter has volunteered as a judge for “We the People,” a nationally-sponsored program for teaching civics education to high school seniors and junior high students. For more than 15 years, Mr. Slaughter has served as a board member of the Indianapolis chapter of the Federalist Society for Law and Public Policy Studies. He spent five of those years as chapter president.  In addition, Mr. Slaughter serves as member of the Nurture Committee with Irvington United Methodist Church, board member with the International Violin Competition of Indianapolis, interim chair of the Board of Governors with Irvington Community School, Inc., member of the Local Leadership Board with the American Lung Association of Indiana, and as an emeritus member of the Board of Visitors with the Indiana University Maurer School of Law. He has previously served as President of the Alumni Board at Indiana University Maurer School of Law.

Today’s announcement follows the Judicial Nominating Commission’s announcement of its three nominees for the vacancy. According to the Indiana Constitution and state statute, the seven-member JNC must recruit and select candidates to fill vacancies on Indiana appellate courts. Interested candidates had more than two months to submit an application. The JNC considered applicants’ legal education, writings, reputation in the practice of law, and other pertinent information. It also conducted in-person public interviews of twenty-nine applicants. It announced fifteen finalists in February. The fifteen finalists were once again publicly interviewed over a two-day period. After deliberations on March 4, the JNC publicly voted to send the three nominees to Governor Pence. The JNC submitted a report to Governor Pence and the Governor had 60 days to appoint one of the nominees to the Court.

I play on the radio from 7 am -1 pm weekdays on 98.9 FM WYRZ and WYRZ.org. Follow me on twitter @WYRZBrianScott or e-mail me at brian@wyrz.org.
Previous Indiana State Police to Participate in Click It or Ticket Campaign
Next State of Indiana Launches Business Web Portal, called INBiz