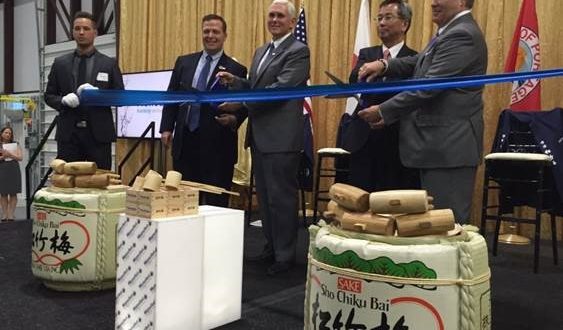 joined U.S.- and Japan-based executives from MonoSol, a subsidiary of Japan-based Kuraray Co. Ltd. Central, in Portage to cut the ribbon on the company’s new manufacturing facility at Ameriplex at the Port in Portage.

In 2014, the company, which manufactures water-soluble films, compounds and solutions, announced plans to invest $95 million to construct a 300,000-square-foot facility, creating up to 150 new jobs by 2020. MonoSol’s technologies are used in a variety of products, including detergents, fertilizers, aerospace composites, prosthetic limbs, laundry bags and linens.

The first 90,000-square-foot phase of the facility will begin operations later this year and the company plans to begin construction on phase two of the building in 2017. This mark’s MonoSol’s fourth facility in Northwest Indiana, adding to its corporate headquarters in Merrillville as well as two production facilities in Portage and La Porte.

MonoSol employs more than 300 associates in Indiana, and will begin hiring employees at its new facility in Portage later this year. New positions are expected to offer average wages above the state and county average wages.

I play on the radio from 7 am -1 pm weekdays on 98.9 FM WYRZ and WYRZ.org. Follow me on twitter @WYRZBrianScott or e-mail me at brian@wyrz.org.
Previous Donnelly Helps Pass Bipartisan Legislation to Improve FAA, Enhance Air-Passenger Safety
Next Office of Community and Rural Affairs Announce New Historic Renovation Grant Program and Open Call for Letters of Intent