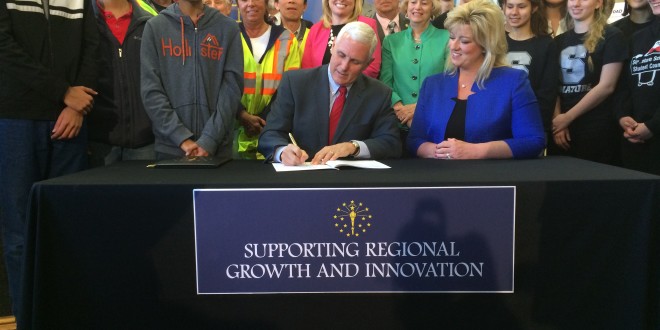 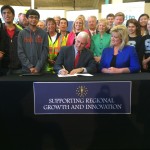 “Through the Indiana Regional Cities Initiative, we have seen regions across the state working in partnership to inspire and generate the development of long-term and dynamic plans for the future,” said Governor Pence. “Indiana’s Great Southwest plan will be key in attracting and retaining a skilled workforce and cultivating a strong business climate for long-term economic development and improving quality of life for the benefit of Hoosiers.”

Indiana’s Great Southwest plan encompasses 19 projects that focus on strengthening the heart of the region by leveraging the new Indiana University academic medical education and research center, improving livability and connectivity, and attracting talent and workforce to the community.

The Indiana Regional Cities Initiative encourages communities to work together to develop and implement regional plans. HEA 1001 allocates $42 million for each of the Regional Cities initiatives, ensuring three regional development plans in North Central, Northeast, and Southwest Indiana receive state funding. Together, these plans outline 100 quality of place projects totaling more than $2 billion in combined public and private investment. More than half of these planned projects, including new riverfront developments, revitalized downtowns and expanded trail systems, are currently scheduled to be completed by the end of 2018.

I play on the radio from 7 am -1 pm weekdays on 98.9 FM WYRZ and WYRZ.org. Follow me on twitter @WYRZBrianScott or e-mail me at brian@wyrz.org.
Previous Donnelly Highlights Congressional Delegation to Middle East on Missile Defense Oversight
Next Early voting is underway for the Indiana Primary