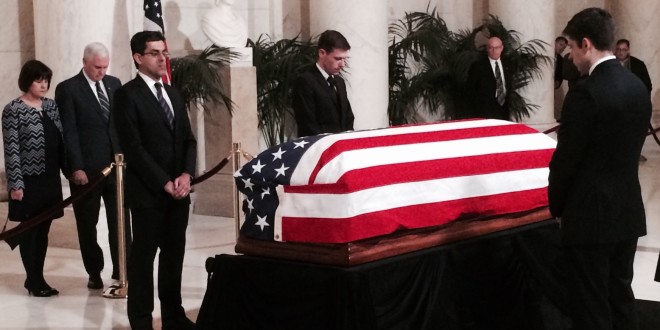 “Justice Antonin Scalia will be remembered as one of the most important figures in American judicial history and he will also be remembered as one of its very finest men. Justice Scalia was adored by his colleagues, admired by his critics, loved by his family and will be forever treasured by his nation. The First Lady and I will always cherish the privilege of paying our respects to this gifted and courageous jurist.

“Justice Scalia arrived on the bench when decades of judicial activism had taken our country away from its judicial moorings. It was Justice Antonin Scalia who returned that focus to our constitution’s original meaning. Justice Scalia played a vital role in helping move the United States back to the original intent of the founders.

“Through his brilliant mind, piercing logic and simple yet precise writings, Justice Scalia authored some of our nation’s most important opinions. He was a fervent defender of the Constitution of the United States and the liberty, property rights and free speech of every American.

“In perhaps his most famous decision, The District of Columbia v. Heller case, writing for the court, Justice Scalia recognized that our Constitution’s Second Amendment meant in fact what it said; that Americans’ fundamental right to keep and bear arms must not be infringed.

“The only true tribute that can fully memorialize the life, work and legacy of Justice Antonin Scalia is the one the ages will confer upon him. He was a towering figure whose influence on America’s legal culture will last forever. May his family and friends be comforted and may he rest in peace.”

I play on the radio from 7 am -1 pm weekdays on 98.9 FM WYRZ and WYRZ.org. Follow me on twitter @WYRZBrianScott or e-mail me at brian@wyrz.org.
Previous Kentucky sues Planned Parenthood of Indiana and Kentucky
Next IEDC official: Full-court press averted disaster, yielded ‘home run’