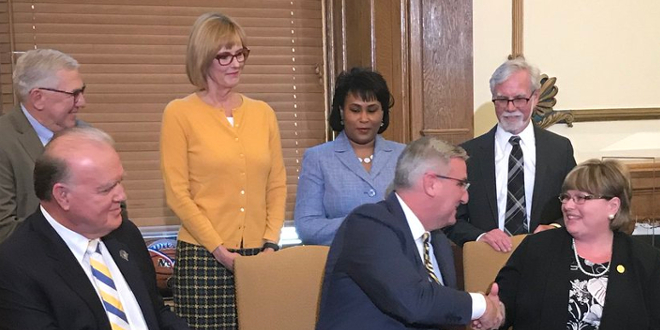 “In light of the many recent, high-profile sexual and workplace harassment cases, it makes sense for all branches of government to take a look at their own policies. There’s zero room for harassment of any kind in Indiana’s state government workplaces, and I’m proud of the work we’ve accomplished to ensure that message is loud and clear in the legislative, executive and judicial branches,” Gov. Holcomb said.

Following the signing, Holcomb outlined changes to the state’s executive branch harassment prevention policies—all of which will be focused on modernization, increasing the culture of professionalism and civility, and empowering bystanders to speak up if they see something inappropriate. Changes include:

Indiana Supreme Court Chief Justice Loretta Rush outlined a strengthened Judicial Branch policy focused on civility. Chief Justice Rush explained, “Past sexual harassment trainings often focused on what behavior was illegal. By emphasizing whether the offensive behavior was illegal, employers appeared to condone harassing behavior if it did not expose them to liability. Training for Judicial Branch employees will make clear our expectation is for an environment free of sexual harassment, intimidation, disrespect, and uncivil behavior.”

I play on the radio from 7 am -1 pm weekdays on 98.9 FM WYRZ and WYRZ.org. Follow me on twitter @WYRZBrianScott or e-mail me at brian@wyrz.org.
Previous Trash Bash! Ushers in Spring Clean-up
Next Donnelly, Young Praise Passage of Bipartisan Bill Establishing Kennedy-King Park in Indianapolis as National Commemorative Site