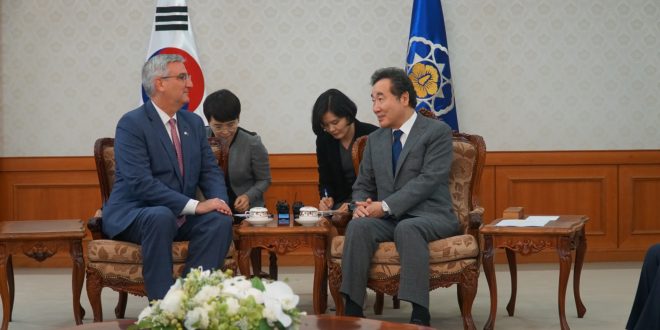 “Already one of our top international trading partners, South Korea offers industry alignment in automotive, advanced manufacturing, pharmaceuticals and other industries, meaning the Indiana-Korea relationship is bursting with potential for increased investment,” said Gov. Holcomb. “It was also an honor for our delegation to visit with Hoosier servicemen and women stationed here. On behalf of 6.7 million Hoosiers I thanked them and their families for their service to our state and nation.”

South Korea is among Indiana’s top 15 trading partners, with pharmaceuticals and medicines, and motor vehicle parts being the top trade categories between the two. Indiana is home to at least 10 South Korean-based business establishments that provide approximately 1,500 Hoosier jobs.

Gov. Holcomb, along with Secretary Schellinger and the delegation, highlighted the many benefits of doing business in Indiana and outlined future investment opportunities during a roundtable hosted by the Korea Chamber of Commerce and Industry. Gov. Holcomb and Secretary Schellinger had the opportunity to share Indiana’s story with business leaders from more than 30 South Korean businesses.

After the business roundtable, Gov. Holcomb and the delegation visited the Joint Security Area (JSA) located within the Korean Demilitarized Zone in Panmunjom. The JSA, which served as the location for peace talks during the Korean War, exists as a neutral place of negotiation between North and South Korean diplomats. The governor and delegation participated in a formal tour of the site and met with U.S. troops.

Gov. Holcomb, First Lady Holcomb, Secretary Schellinger and the delegation met with the Republic of Korea Prime Minister Lee Nak-yon to highlight Indiana’s global connectivity and discuss how the state can continue to support South Korean-based companies that have operations in Indiana.

Gov. Holcomb, Secretary Schellinger and members of the delegation met with U.S. Embassy Seoul Deputy Chief of Mission Robert Rapson at the residence of the U.S. Ambassador to the Republic of Korea. The group discussed the state’s solid foundation with South Korea, with South Korean-based companies like Daechang Seat Co., MotionWear, Naturegenic, Oh Pharmaceutical, POSCO, Superior Essex and Universal Bearings finding success in the state, and opportunities for mutual support.

In the evening, Gov. Holcomb, First Lady Holcomb, Secretary Schellinger and the delegation hosted a Friends of Indiana reception with U.S. Deputy Chief of Mission Robert Rapson to convene business executives, government officials and academic stakeholders, and thank them for their many contributions to the growing Indiana-South Korea partnership.

I play on the radio from 7 am -1 pm weekdays on 98.9 FM WYRZ and WYRZ.org. Follow me on twitter @WYRZBrianScott or e-mail me at brian@wyrz.org.
Previous Indiana Department of Education Releases Spring 2019 ILEARN Results
Next Lafayette Dog Selected as 2020 Early Times All-American Dog