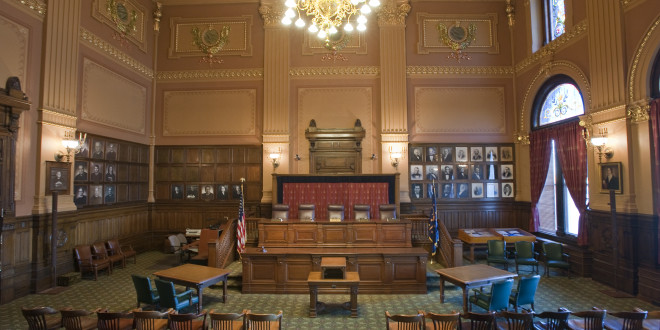 Attorney Geoffrey G. Slaughter will be sworn in as an Indiana Supreme Court Justice on Monday, June 13 in a brief, private ceremony. Chief Justice Loretta H. Rush will administer the oath of office, which will allow Justice Slaughter to begin deciding cases and handling administrative matters with his colleagues. Oral arguments are scheduled for June 23—it will be the first arguments Justice Slaughter hears from the bench.

Justice Slaughter’s ceremonial state investiture, where Governor Mike Pence will administer the oath of office publicly, will take place August 11 in the Supreme Court Courtroom at 1:00 p.m. The ceremony will be webcast live at courts.in.gov.

Long time Justice Brent E. Dickson retired from the Court in April. According to the Indiana Constitution and state statute, a merit selection system provides for a seven-member Judicial Nominating Commission (JNC) to recruit candidates to fill appellate court vacancies. Thirty judges and lawyers applied for the position and the JNC selected three finalists. The Governor named Slaughter as the 109th Indiana Supreme Court Justice in May.

I play on the radio from 7 am -1 pm weekdays on 98.9 FM WYRZ and WYRZ.org. Follow me on twitter @WYRZBrianScott or e-mail me at brian@wyrz.org.
Previous Illinois-Based Firefighting Equipment Manufacturer Relocating to Indiana
Next ISTA Interim Executive Director Announced