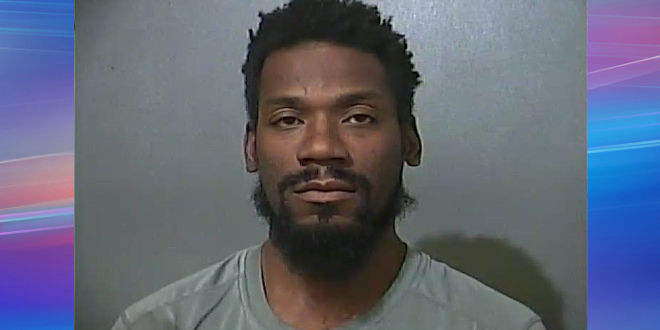 Vigo County – Friday, September 13, 2019, at approximately 11:20 p.m., Indiana State Police Trooper Brad Fyfe observed a vehicle traveling at a high rate of speed on Poplar Street. After activating his radar, Trooper Fyfe received a reading that the vehicle was traveling 50 mph in a 30 mph zone.  The vehicle was a white SUV.  Trooper Fyfe then turned around and caught up to the SUV, activating his emergency lights and siren to initiate a traffic stop.  The white SUV then ran a stop sign at south 8th St. and Crawford St., turning east.  Once clearing the intersection, the white SUV turned immediately and came to an abrupt stop behind a residence.

Trooper Fyfe then identified the subject as Terrance L. Ballard, age 36, of Terre Haute, Indiana. During an inventory of Ballard’s vehicle it was discovered that a loaded revolver was in the vehicle. After running a criminal check, it was discovered that Ballard was not allowed to possess a handgun due to being a violent felon.  Marijuana was also located on Ballard’s person.  Further investigation also revealed that he was intoxicated and had a BAC of .20%.  Ballard was taken to the Vigo County Jail where he is currently being held without bond.

I play on the radio from 7 am -1 pm weekdays on 98.9 FM WYRZ and WYRZ.org. Follow me on twitter @WYRZBrianScott or e-mail me at brian@wyrz.org.
Previous IndyGo Begins Transition to MyKey
Next Task Force for Assessment of Services and Supports for People with Intellectual and Developmental Disabilities to meet in Indianapolis