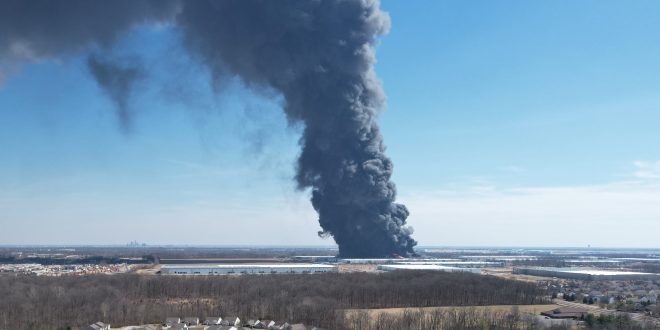 The first fire personnel arrived at the scene at approximately 12:00 p.m. Initially fire personnel began to fight the fire from the inside, but they quickly took a defensive position due to the nature of the fire.

Several fire agencies from around Central Indiana assisted with the scene. We believe there were approximately 1,000 employees at the facility when the fire started, and Walmart believes they are all accounted for. Plainfield Community School Corporation buses worked to unite Walmart employees with loved ones at a reunification center nearby.

According to Plainfield Fire Chief Brent Anderson, there were an estimated 180-200 firefighters working around the building to fight the fire. The operation is estimated to last upwards of 24 hours, as crews continue to work to put out hot spots. Police and fire personnel will remain on scene for the next couple of days to secure the area.

County Road 100 S. between 900E/Smith Rd and Ronald Reagan will be closed to thru traffic until further notice.

I play on the radio from 7 am -1 pm weekdays on 98.9 FM WYRZ and WYRZ.org. Follow me on twitter @WYRZBrianScott or e-mail me at brian@wyrz.org.
Previous INDOT reminds drivers of North Split closures ahead of NCAA events
Next Rolling slowdowns on I-74 scheduled on Sunday west of Brownsburg