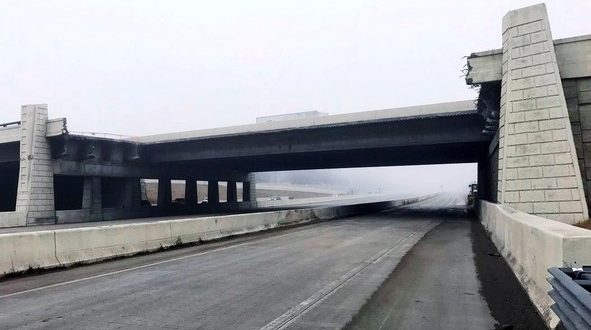 What to expect ahead

Crews will install construction zone signs and begin selectively removing concrete and steel at the east end bridge abutment to prepare the site for new beams and reconstruction of the bridge deck. This work will be done from the eastbound Rockville Road loop ramp to northbound I-465, which remains closed. No traffic restrictions on I-465 are expected during this part of the project.

In the upcoming weeks, similar removals will be performed at the median pier. This work will install temporary concrete barriers to close the shoulders of I-465. One left lane of northbound and southbound I-465 will be closed during overnight hours.

Some remaining portions of the bridge deck over northbound I-465 will also be removed before rebuilding can begin. This will require some overnight multiple-lane closures on both directions of I-465 in the weeks ahead. Specific dates and times of lane closures will be announced in advance.

The U.S. 36 / Rockville Road bridge over I-465 was rebuilt in 2009 as part of the Accelerate 465 corridor project. The existing bridge plans are being used to quickly reproduce replacement beams. Four beams, each weighing about 70 tons and measuring 125 feet long, have been ordered. The manufacturer is working to fill the order as quickly as possible. Current estimates for beam production and delivery are about six to eight weeks. More accurate estimates for project completion can be given as work progresses.

INDOT is using an existing bridge maintenance and repair contract with Rieth-Riley to begin construction and complete the emergency repairs as soon as possible. The on-call, or job-order, contract is designed for high-priority bridge repairs that are beyond what can typically be performed by INDOT’s in-house maintenance crews. The pilot program was launched in early 2016 and is intended to reduce project delivery time and costs.

It is INDOT’s practice to seek reimbursement on behalf of taxpayers for damages to state property. The damages to the Rockville Road bridge are much more extensive than a typical INDOT claim. On claims of this size, INDOT’s practice is not to estimate but rather invoice based on actual expenses. This process will take time as INDOT captures and documents all costs associated with the crash and repairs.

About the bridge damage

At about 8 a.m. on Jan. 10, a mobile car crusher on northbound I-465 crashed into the Rockville Road bridge and destroyed four of about 14 load-bearing girders.

After closing the interstate and the overpass to secure the location and assess damage, INDOT engineers determined the damaged girders would be removed.  Demolition contractors mobilized immediately, working through the night to complete removal of the damaged beams and reopen the interstate at about 12:30 p.m. the next day, Jan. 11.

I play on the radio from 7 am -1 pm weekdays on 98.9 FM WYRZ and WYRZ.org. Follow me on twitter @WYRZBrianScott or e-mail me at brian@wyrz.org.
Previous Rexnord Industries (Indianapolis) Workers Eligible for Trade Adjustment Assistance
Next Donnelly Lauds VA Move to Exempt Health Care Positions from Federal Hiring Freeze