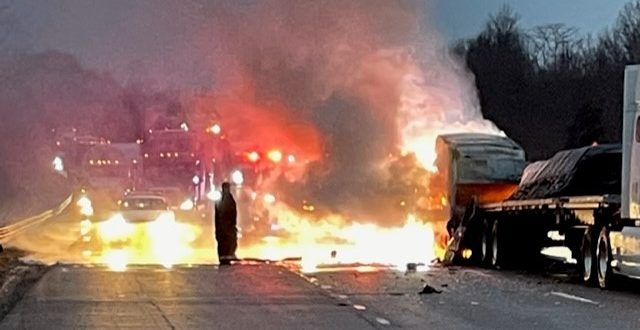 Fiery Crash on Interstate 70 near Terre Haute Claims a Life

Vigo County – On the morning of February 24, 2022, troopers from the Indiana State Police Putnamville Post are investigating a crash between a semi tractor-trailer and a Ford transit van on Interstate 70, that claimed a life.

Preliminary investigation by Master Trooper Ted Robertson, of the Putnamville Post, indicates that at approximately 6:41 a.m., a Ramaz Chokheli, age 51, of Brooklyn, New York, was operating a 2019 Volvo semi tractor-trailer eastbound on Interstate 70 near the three mile marker.  Chokheli was stopped due to the clean up of multiple vehicle accidents that had occurred earlier in the morning.  It was at this time that a 2020 Ford Transit van was traveling eastbound and failed to observe that traffic was slowed or stopped in the area, running into the rear of Chokheli’s semi tractor-trailer.  The force of the collision caused the van to erupt in flames.  A trooper was located near the accident scene and attempted to extricate the driver out of the transit van, but was unable to do so because of the damage from the collision and the intense heat from the fire.  Sugar Creek Volunteer Fire Department arrived shortly after and worked to extinguish the fire.

Drugs and alcohol are not believed to be a contributing factor of the accident.

I play on the radio from 7 am -1 pm weekdays on 98.9 FM WYRZ and WYRZ.org. Follow me on twitter @WYRZBrianScott or e-mail me at brian@wyrz.org.
Previous Care to Change Addresses Demand for Mental Health Services by Opening New Offices
Next Attorney General Todd Rokita announces $26 billion national settlement with drug distributors and Johnson & Johnson