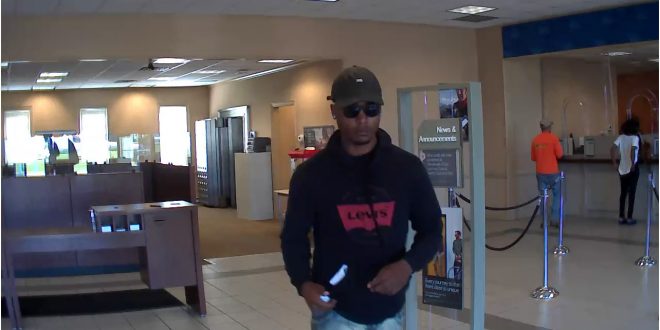 INDIANAPOLIS – Detectives with the Indianapolis FBI Safe Streets Task Force seek the public’s assistance for information that would lead to the identity of the person depicted in the attached surveillance photos.

On Friday, October 14, 2016, at approximately 1:40 p.m., officers with the Indianapolis Metropolitan Police Department (IMPD) were dispatched to the Chase Bank, located in the 1300 block of West 86th Street, reference a robbery that had just occurred. When officers arrived, officers were told that a black male believed to be 20 to 25 years of age after implying he had a gun made a written demand for money. The bank teller acknowledged the suspect’s demands and handed him an undetermined amount of U.S. Currency. The suspect fled south from the bank on foot. No injuries were reported as a result of this incident.

The suspect is described as a black male, 6 foot 1 to 2 inches tall, slender build, 20 to 25 years of age, wearing a black hooded sweatshirt, blue jeans, sunglasses, and a black baseball cap.

The Indianapolis FBI Safe Streets Task Force is conducting an active investigation into this incident. Anyone with information about the suspect’s identity or circumstance of this incident is urged to contact the Indianapolis FBI Safe Streets Task Force at 317.595.4000 or Crime Stoppers of Central Indiana at 317.262.8477 or TIPS. Citizens can also download the mobile P3tips app for Apple or Android phones to submit a mobile tip or go to www.CrimeTips.org to submit a web tip. Information shared via Crime Stoppers should be considered anonymous and confidential and could be eligible for a cash reward of up to $1000 if the information leads to a felony arrest.

I play on the radio from 7 am -1 pm weekdays on 98.9 FM WYRZ and WYRZ.org. Follow me on twitter @WYRZBrianScott or e-mail me at brian@wyrz.org.
Previous Indiana State Police Calls Patriot Majority USA Allegations Completely False
Next Hoosiers Asked to Keep Campaign Signs Out of Rights of Way