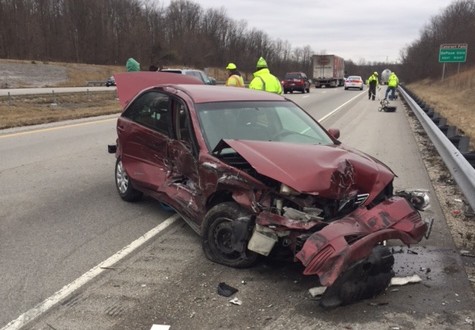 Putnam County—This afternoon at 1:30, Indiana State Police and Putnam County emergency agencies responded to a two-vehicle crash in the westbound lanes of Interstate 70 near the 42 mile marker.

Preliminary investigation revealed that 49-year-old Jonathan Nichols-Pethick of Terre Haute, IN., was westbound in his 2006 Toyota when he reportedly fell asleep and traveled into the median. Nichols-Pethic then overcorrected, traveled back into the westbound lanes, and skidded broadside into a westbound tractor-trailer. The 2015 Freightliner tractor, driven by 43-year-old Mark Bishop of Cheney, Kansas, then struck the passenger car and both vehicles impacted the guardrail.

I play on the radio from 7 am -1 pm weekdays on 98.9 FM WYRZ and WYRZ.org. Follow me on twitter @WYRZBrianScott or e-mail me at brian@wyrz.org.
Previous Brownsburg Rotary Honors Town Employee of the Year John Burke
Next Secretary of State recognizes Mutual Savings Bank for 125 years of service