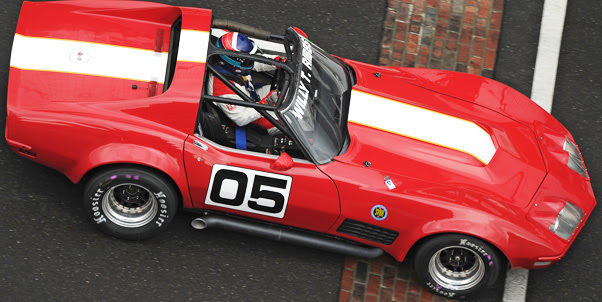 2002 Brickyard 400 winner Elliott and legendary NASCAR team owner and crew chief Ray Evernham also will team up for the “Garage 34” entry in the race on the 14-turn, 2.439-mile IMS road course.

All drivers in the Pro-Am race compete in machines from the “Group 6” SVRA class, which includes 1963 to 1972 vintage Corvettes, Camaros, Cobras and Mustangs. Jones and Larry Ligas will share a 1961 Jaguar XKE in the race, adding even more interesting visual and audio variety to the field of diverse, iconic machines.

Indy Legends Pro-Am racing is scheduled to start at 1 p.m. (ET) Saturday at IMS. Driver introductions start at 12:05 p.m., and fans can enjoy a pre-race pit walk at 12:25 p.m., getting autographs from drivers and an up-close look at the incredible cars that will cross the Yard of Bricks in competition just 35 minutes later. An Indy Legends Pro-Am practice session also is scheduled for 11:35 a.m.-12:05 p.m. Friday.

The field is stacked with championship drivers, proved by the mind-boggling cumulative numbers of their respective careers:

Previous winners of the Indy Legends Pro-Am race entered this year include Al Unser Jr. and Peter Klutt (2014), Bob Lazier and Jim Caudle (2015), Tracy and Gary Moore (2016) and Robby Unser (2016). The field last year was organized into A Production and B Production classes, which will continue this year.

In addition to the Pro-Am, there will be a festival of other activities from Friday, June 16 through Sunday, June 18 at the Brickyard Vintage Racing Invitational, including the Hagerty Insurance “shine and show” car corral, a “Celebration of Vintage Motorcycles” with vintage motorcycle racing and displays and 500-plus vintage racers ranging more than 100 years of automotive history racing in SVRA Groups 1 through 12. An oval exhibition featuring a race car show of judged competition for the A.J. Watson and Sir Jack Brabham trophies led by IMS historian Donald Davidson also will take place.

The professional Trans Am series will compete Saturday, June 17 and Sunday, June 18, with thunderous V8 engines producing 850 horsepower. Heading the pack will be series champion Amy Ruman, who has won the title the last two years. The Mazda Global MX-5 Cup also will race Saturday and Sunday at IMS, featuring tight racing among promising sports car stars of the future on the “Mazda Road to 24” sports car ladder.

Visit IMS.com to order tickets or learn more about the Brickyard Vintage Racing Invitational. Ticket prices are $15 Friday, $30 Saturday and $20 Sunday. Kids 15 and under are free when accompanied by an adult.