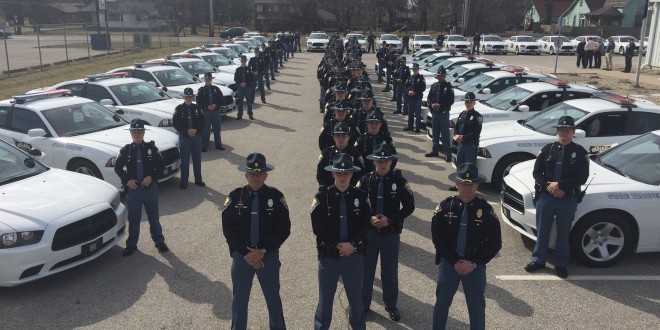 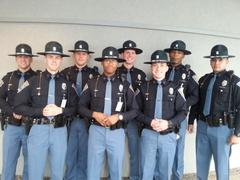 Indianapolis – Eight new troopers from the Indianapolis Post joined their classmates from the 75th Recruit Academy this morning to receive their first patrol cars at the Indiana State Police Museum. The ceremony began with Superintendent Carter addressing the 45 new troopers from around the state, he said to them “this is a big day for you, your families, for our department and for your communities.” Carter also recognized the Indiana State Police logistics staff, the mechanics and the installers for their countless hours spent preparing these cars. Each rookie car was previously assigned to a trooper and had anywhere from 80,000 to 100,000 miles on it. Captain Jay Nawrocki said “each of these cars took an average of 40 man hours for preparation, each car received a full service including brakes, oil change, lighting packages, touch-up paint, tires and new equipment, not to mention any repairs to insure the safety of these cars.”

Leading up to today these troopers have endured a lengthy hiring process, over 500 hours of classroom instruction, and over 300 hours of hands on practical scenario based instruction. Upon graduation from the Indiana State Police Academy in December of 2015 the troopers spent nearly four months in field training, a period in which each trainee works side by side with a veteran trooper.

Trooper Ryan Kenworthy, 30 from Greentown, Indiana was formerly a teacher at Heritage Christian High School. He resides in Noblesville and will be patrolling Boone County

Trooper Perri Boykin, 23, is a native of Edwardsville Illinois and prior to becoming a trooper was a student at Southern Illinois University Edwardsville. He lives in Indianapolis with his wife and will be patrolling Marion County.

Trooper Cameron Bottema, 30, from Greenwood, was formerly a chaplain for the Indiana State Police, he lives in Greenwood and will be assigned to Marion County.

Trooper Nathan Parton, 30, was previously a volunteer firefighter and EMT and employed at Federal Express. Parton lives in Mooresville and will be assigned Marion County.

Trooper Arturo Azcona III, 23, rasied in Hobart Indiana and graduated from Chesterton High School. He currently serves in the Indiana National Guard as a 13B cannon crew member. Azcona lives in Indianapolis and will patrol Marion County.

Trooper Larry Miers, 30, is from North Carolina, he was previously a deputy with the Marion County Sheriff’s Office from 2007 to 2015. Trooper Miers resides in Indianapolis with his wife and daughter, he will be patrolling Marion County.

Trooper Benjamin Polley, 26, of Avon is a United States Marine who was previously deployed to Afghanistan. Trooper Polley and his wife reside in Hendricks County, he will be primarily patrolling Boone County.

*First Photo – all 45 rookies with current Troopers and command staff

For more information on how to become an Indiana State Trooper visit www.in.gov/isp

I play on the radio from 7 am -1 pm weekdays on 98.9 FM WYRZ and WYRZ.org. Follow me on twitter @WYRZBrianScott or e-mail me at brian@wyrz.org.
Previous INDOT Announces $80-100 Million Call for Rural Local Projects
Next Coats Statement on Meeting with United Technologies Representatives