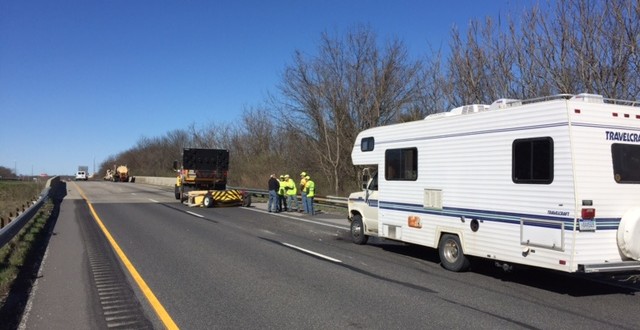 Driver Impacts INDOT Vehicle on I-70 in Vigo County

Vigo County—At 11:00 this morning, Indiana State Police troopers and members of the Terre Haute Fire Department responded to a two-vehicle crash in the westbound lanes of Interstate 70 near the 7.5 mile marker. The crash involved a camper and an INDOT vehicle.

Preliminary investigation revealed a white 1991 camper, driven by 72-year-old Harrell Ray Cook of Hale, Michigan, failed to his reduce speed and/or move into the left lane, striking a yellow 2006 International dump truck pulling an impact reducing safety device in the rear. The INDOT vehicle was stationary and driven by 41-year-old Christopher Lashbrook of Marshall, IL. Lashbrook was not injured.

Cook was transported to Terre Haute Regional Hospital for treatment of a medical condition and not injuries. Cook was cited for failure to move over for highway maintenance vehicle.

Indiana Department of Transportation employees were conducting routine highway maintenance in the westbound lanes with all required warning signage and electronic arrow boards in place.

I play on the radio from 7 am -1 pm weekdays on 98.9 FM WYRZ and WYRZ.org. Follow me on twitter @WYRZBrianScott or e-mail me at brian@wyrz.org.
Previous Indiana State Police Participate in Tri-State Human Trafficking Initiative
Next State Housing Finance Agency launches Ramp Up Indiana Program