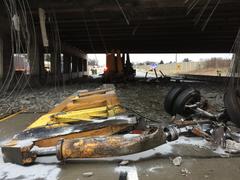 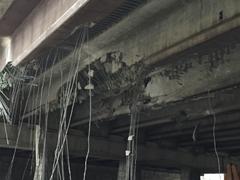 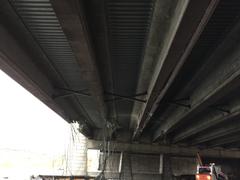 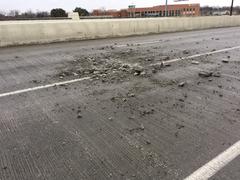 Indianapolis, IN – At 8:06 this morning the Indiana State Police were called to the scene of a major crash that closed all northbound lanes of I-465 at  US 36 / Rockville Road on the west side of Indianapolis.

Preliminary investigation has determined there were a total of six vehicles involved in the crash; one semi-truck and trailer with a mobile car crusher on the trailer bed, a utility vehicle and four passenger cars.
Based on descriptions from witnesses and investigation at the scene, it has been determined the semi-truck, operated by Twins Trucking of Indianapolis, was northbound on I-465 approaching the US 36 / Rockville Road overpass when, for reasons yet to be determined, the hydraulic piston/arm of the mobile car crusher extended upward while the semi-truck was in motion at highway speed.  This resulted in the car crusher striking the overpass support beams of the US 36 / Rockville Road bridge over I-465.  The force of the impact caused the trailer to separate from the tractor and at least four beams of the bridge were impacted and resulted in significant damage.  The east bound driving lanes of the Rockville Road bridge over the interstate were also severely damaged the result of this crash.

Hundreds of pieces of concrete, from baseball to basketball size and larger, fell from the damaged support beams onto northbound traffic that was traveling under the bridge at the time of the crash.  This resulted in five other vehicles being struck and damaged from the falling debris.  One piece of concrete fell through the windshield of a northbound car being driven by Christine Haraburda, 28 of Indianapolis.  This resulted in non-life threatening upper body injuries and after being treated by personnel from the Wayne Township Fire department she was transported to Eskenazi Hospital for further treatment.

The Indiana Department of Transportation (INDOT) had personnel on the scene in less than an hour to begin assessment of the damage and start planning for repairs and temporary detours.  Below is a copy of the news release issued by INDOT shortly after 2:00 p.m. today: