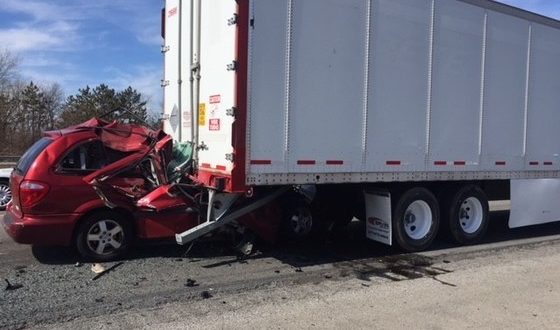 Newton County – Monday morning, at approximately 11:25 a.m., officers from the Indiana State Police Department responded to a two vehicle crash on I-65 northbound at the 232 mile marker (2 miles north of the Demotte exit), in which an Elkhart, IN, woman died.

Preliminary investigation by Master Trooper Fred Trammel revealed that Anastasia J. Chapman, 23, from Elkhart, IN, was driving a red 2007 Dodge Grand Caravan northbound on I-65, approaching the 232 mile marker.  Chapman, for unknown reasons, failed to see that traffic ahead of her had slowed and rear ended a 1986 Peterbilt semi-tractor, pulling an empty trailer. The Peterbilt was driven by Derek G. Juhl, 28, of Brook, IN. The semi-tractor is owned by Jaclyn Kindig DBA Waylyn Trans and Robert Hoeferlin, both of Brook, IN.  At the time of the crash, traffic was backed up due to pothole repair taking place approximately one mile north of the crash location.

Chapman was pronounced dead at the crash scene by the Newton County Coroner.  Juhl was not injured.  Notification has been made to family members.

*All suspects are innocent until proven guilty in a court of law.

I play on the radio from 7 am -1 pm weekdays on 98.9 FM WYRZ and WYRZ.org. Follow me on twitter @WYRZBrianScott or e-mail me at brian@wyrz.org.
Previous Westside Professional Women is offering three $1,000 scholarships to Hendricks County women
Next Unarmed Response to Active Shooter Events Program Wednesday Evening, Greencastle High School