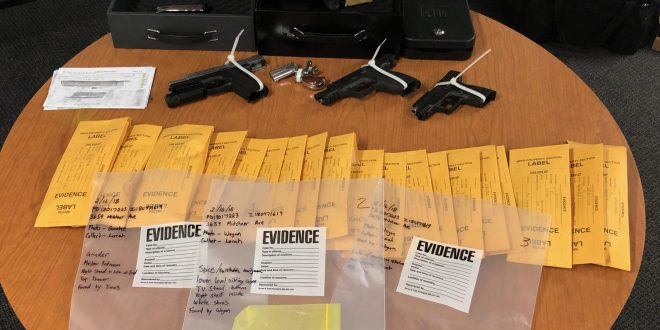 Just before 3 p.m. on 02/16/2018, the IMPD East District Middle Flex Team assisted with Community Corrections visit at the residence of 35-year-old Tierre Moore in the 3600 block of N Mitchner Ave after Mr. Moore had violated the Electronic Monitoring component of his MCCC agreement. Mr. Moore is a current Indianapolis Violence Reduction Partnership target and an uncooperative shooting victim.  IMPD had specific knowledge that Mr. Moore had ties to the “Grundy crew.”

The East District Flex Team obtained and search warrant for the residence after a firearm and marijuana had been located. The search warrant yielded the following:

Mr. Moore was subsequently arrested for suspicion of escape and Serious Violent Felon in possession of a firearm. He was later transported to the CCB for processing. The Marion County Prosecutor’s Office will review the case and make a charging decision. ATF agents will be reviewing the case for possible federal charges.

This is another example of great partnerships working to take crime guns and violent offenders off the street. Out of this investigation, four guns were confiscated, one of which was stolen. Crime guns will not be in the hands of criminals, but instead will be held as evidence for prosecution against those who possess them. It takes an entire community to make a difference in violent crime. Continue to send a message and report criminal activity. Call 317.262.TIPS (8477) to leave information on criminal activity anonymously. The IMPD appreciates the community’s ongoing support and efforts in helping to make Indianapolis a safer place to live, work, and play!

I play on the radio from 7 am -1 pm weekdays on 98.9 FM WYRZ and WYRZ.org. Follow me on twitter @WYRZBrianScott or e-mail me at brian@wyrz.org.
Previous Indiana State Police Seeks Recruits for 78th Recruit Academy
Next When Do Vehicle Crashes Happen? This Interactive Site Will Tell You; Learn Even More at the MPH Data Day on March 6, 2018