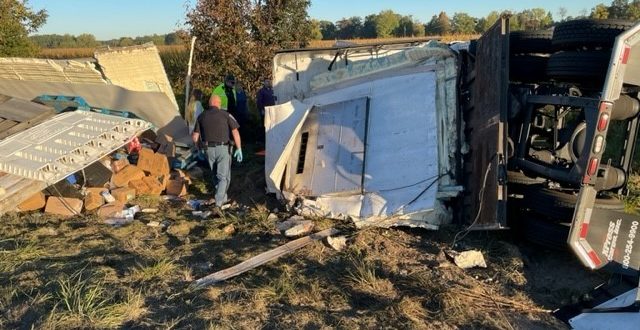 Clay County Accident Sends One to the Hospital Via Air Ambulance

Clay County – October 4, 2022, at approximately 8:00 a.m., troopers from the Indiana State Police Putnamville Post responded to an accident involving a semi tractor-trailer and a passenger vehicle on Interstate 70 near the twenty-three-mile marker westbound.

The preliminary crash investigation by Trooper Colton Maynor revealed that Judith Minar, age 78, of Brazil, Indiana, was driving a 2019 Honda and was attempting to merge onto Interstate 70 westbound from the Brazil exit at the twenty-three-mile marker.  Minar failed to observe a 2023 Volvo semi driven by Troy Pina, age 40 of Smyrna, Georgia, that was traveling westbound in the driving lane. Minar’s vehicle sideswiped the semi, causing a collision that forced the Honda into a spin, with it eventually coming to a stop facing east in the westbound driving lane.  Pina’s semi traveled off the north side of Interstate 70, rolling onto the driver’s side, trapping Pina inside the truck. Good samaritans at the scene rendered lifesaving first aid to Pina until the arrival of first responders.

Upon the arrival of the first responders, Pina was extracted from the vehicle and transported by air ambulance to a hospital in Indianapolis, for further medical care.

Interstate 70 westbound near the twenty-three-mile marker was reduced to one lane for cleanup for approximately four hours.

I play on the radio from 7 am -1 pm weekdays on 98.9 FM WYRZ and WYRZ.org. Follow me on twitter @WYRZBrianScott or e-mail me at brian@wyrz.org.
Previous Stinesville man injured in tree stand fall
Next Leadership Hendricks County now accepting applications for 2023 class through December 1st