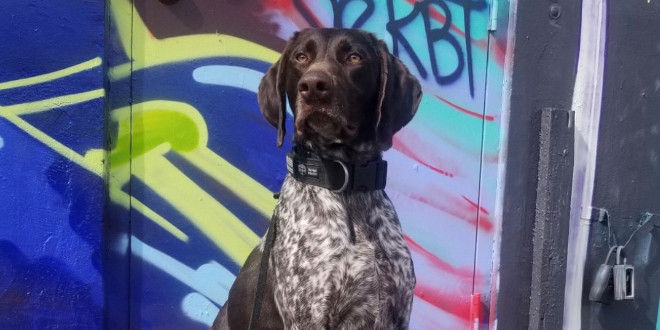 This is the first year for the TOP DOG contest for CIK9, a non-profit founded in 2019. Central Indiana handlers were invited to submit a photograph of their K9 partners for the Facebook contest. Over the two-week voting period, the ten contenders collected more than 4,800 votes in all. “We wanted to do a contest to highlight the vast array of working K9s that serve the Central Indiana area,” said Keith Gray, coordinator of the CIK9 contest. “It was a lot of fun watching the contest as throughout the two-week run there were different K9 teams leading the pack. Just when you thought one was ahead, another would come up from behind.”

Liso-Lee was chosen out of a field of ten local active and retired working dogs representing city, state, and federal departments in the nine-county metro Indianapolis area. K9 contestants hold a variety of specialized certifications including for accelerants, explosives, narcotics, patrol, apprehension, and electronic scent.

Winner K9 Liso-Lee is a four-year-old German Shorthaired Pointer, certified in Explosive Detection. Officer Lindsay Rozzel is his human partner for the last three years. When he is off duty, he lives with Rozzel and family, but as more than a pet. Rozzel and Liso-Lee are partners personally and professionally 24 hours a day. Living with a working dog requires extraordinary responsibilities regarding health care, nutrition, and training. Some working K-9s are not as socially comfortable as Liso-Lee. “His favorite thing to do when he isn’t at work is to hang with the family,” Rozzel said. “He loves to play fetch and to hide his own toys.” Carrots are his favorite snack. He, like other much-loved dogs, has a nickname: Waggles.

Liso-Lee is one of the exceptional K9s double-named to honor an American who died in the terrorist attacks on 9/11. He carries the name Lee to honor the memory of Lee Adler. In addition to Liso-Lee’s daily duties keeping people and property safe at the airport, he has had many special opportunities which include multiple presidential details and major sporting events.

“There was a lot of effort and enjoyment that went into winning the photo contest, even down to the picture selection, said Rozzel. “We became very creative and had to do a lot of boots-on-the-ground work, which I wasn’t expecting. It provided opportunities to get outside our box and interact with many more people than we ever imagined. It was a lot of fun and Liso-Lee was very convincing in getting the likes we needed. I am very proud and honored to be Liso-Lee’s partner and having him named the first CIK9 TOP DOG!”

K9 Liso-Lee won a $250 Tactipup gift certificate provided by the company. Tactipup is a family-owned and operated business based out of Clearwater, Fla. The owner of the company is a former Hoosier who is a big supporter of the K9 community.

Since its inception, CIK9 has awarded two Shadow Fund grants to retired K9s and their handlers for medical care expenses. In addition, Vice-Chair and Co-founder, Kyle Schaefer, has organized and hosted quarterly training opportunities for all K9 units in Central Indiana.

A fundraiser for the recently launched Capital K9 Campaign to build a permanent training facility is being held Oct. 3 at TOPGOLF in Fishers. Chair and Co-Founder Theresa M. Brandon expresses their mission with fervor saying, “It’s all about the dogs!”

In addition to CIK9 tries to give service, support, to increase community awareness and be fun.

The Central Indiana K9 Association is a volunteer‐driven, nonprofit organization founded in 2019. Its programs, which are funded by public donations, events, and grants, serve a three‐fold mission: To assist, train, and honor K9 working dogs, who serve faithfully, vigilantly, and selflessly within Central Indiana. For more information go to https://cik9.org

I play on the radio from 7 am -1 pm weekdays on 98.9 FM WYRZ and WYRZ.org. Follow me on twitter @WYRZBrianScott or e-mail me at brian@wyrz.org.
Previous Governor Eric Holcomb directs flags to be flown at half-staff for U.S. service members and other victims of Kabul attacks
Next Indy Chamber Announces Finalists for 44th Monumental Awards