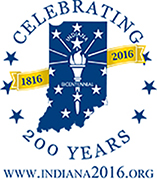 Electronic nominations must be submitted by Jan. 31 or postmarked by that date if submitted by mail. A handful of deserving honorees representing Hendricks County will carry the Indiana Bicentennial torch when it arrives here in the fall.

Nominees must be a former or current resident of Hendricks County and have achieved personal or professional excellence or celebrity status or made an outstanding contribution to their neighborhood, region or state through public service, volunteerism or heroism. A person can be nominated posthumously and a substitute torchbearer can be submitted to carry the torch on their behalf. Nominees can be any age (torchbearers that are minors will be subject to additional youth torchbearer requirements). The complete list of torchbearer criteria may be found and nominations submitted on the online nomination page at http://www.in.gov/ibc/torchrelay/2621.htm.

Nomination forms also can be picked up from 9 a.m. to 5 p.m. Monday-Friday at the Visit Hendricks County office at 8 W. Main St. in Danville on the north side of the square or at any Hendricks County library branch.

Developed by the state, the torch relay will be patterned after the Olympic Torch Relay and is designed to connect Hoosiers across the state and nation with their home state during the bicentennial year. The torch will pass through all 92 counties during a five-week trek beginning Sept. 9 in Corydon, Indiana’s first state capital, and culminate with a celebration Oct. 15 on the grounds of the statehouse in Indianapolis.

The torch will spend about four hours in Hendricks County on Friday, Sept. 23 starting that morning in Brownsburg and making its way through Avon, Danville, Clayton and Plainfield before being passed off to Morgan County.

Once all nomination forms are collected, a juried nomination process will be employed in each county to select torchbearers. Hendricks County has formed a selection committee with representatives from throughout the county to manage this process.

In addition to the Torch Relay, many other plans locally are well underway. A Legacy Projects Committee has been formed in Hendricks County and has a number of group-ready projects for clubs or any other community or civic groups wanting to get involved. That committee has set a goal of having 20 state-endorsed Bicentennial Legacy Projects in Hendricks County in 2016.

A Hendricks County Bicentennial Events Committee also meets monthly to track and encourage event organizers to add a historic component to existing events or create a new bicentennial event in 2016. That group also has set a goal that the county hosts 100 state-endorsed bicentennial events in 2016.

Finally, a new Hendricks County Bicentennial Facebook page has been created to allow locals to stay informed about all the local bicentennial happenings. That page will be updated frequently with news, information and even fun historic facts about Hendricks County.

I play on the radio from 7 am -1 pm weekdays on 98.9 FM WYRZ and WYRZ.org. Follow me on twitter @WYRZBrianScott or e-mail me at brian@wyrz.org.
Previous New Poll Suggests Hoosiers Strongly Support School Choice, View Public Education in Indiana on “Wrong Track”
Next Sen. Young’s Bill Fighting Meth Passes Committee