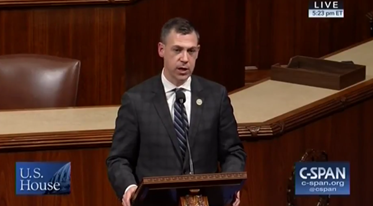 Washington, D.C. – Congressman Jim Banks (IN-03) spoke on the House floor to honor Joe George, a sailor who showed exceptional bravery during the attack on Pearl Harbor and saved six men trapped on the USS Arizona.

Text of the speech follows:

I rise today to honor Joe George, a sailor who showed exceptional bravery during the attack on Pearl Harbor.

Joe defied direct orders from his superior officer and saved the lives of six men trapped on the embattled USS Arizona.

Mr. Speaker, for years Joe’s family and two veterans he saved have petitioned the Navy to acknowledge his bravery.

I introduced a resolution that highlights Joe’s courage and calls for the Navy to recognize his selfless actions during the attack.

Mr. Speaker, I am pleased that the Navy recently announced that Joe George will be posthumously awarded the Bronze Star for his heroism.

Joe George is an American hero and a shining example of the courage of the Greatest Generation.

Thank you Mr. Speaker, I yield back.”

I play on the radio from 7 am -1 pm weekdays on 98.9 FM WYRZ and WYRZ.org. Follow me on twitter @WYRZBrianScott or e-mail me at brian@wyrz.org.
Previous Traffic Stop in Hendricks County Reveals a Reindeer Passenger
Next Donnelly Recognized as 2nd-Most Bipartisan Senator Since 1993