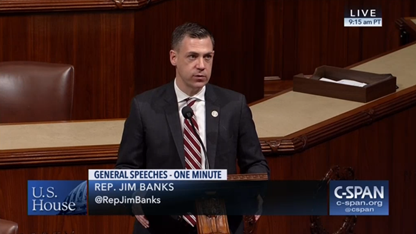 Washington, D.C. – Congressman Jim Banks (IN-03) today spoke on the House floor about former northeast Indiana Congressman Ed Roush and the creation of the 9-1-1 system. Banks recognized Roush as the driving force behind the introduction of 9-1-1 as the national emergency telephone number. This year marks the 50th anniversary of the emergency system’s operations.

Text of the speech follows:

“I rise today to commemorate the 50th anniversary of the 9-1-1 system and to honor its founder, Congressman Ed Roush of Huntington, Indiana.

As the representative for my northeast Indiana district, the late Congressman Roush was a driving force behind the efforts to create one central telephone number that citizens could use in a time of crisis to receive help.

Launching a one-man crusade in the House, Congressman Roush wrote to all 50 governors and countless public servants to gain support for an emergency phone number that was easy to remember under stress and short enough to dial quickly.

On March 1st, 1968, the Congressman’s efforts were successful and the 9-1-1 system went live in Huntington, Indiana with Congressman Roush placing the first test call.

Due to his efforts, Huntington led the way for other municipalities to adopt the important emergency system that has saved so many lives.

Hoosiers are proud of the late Congressman Roush for his leadership 50 years ago on this initiative.

We as a nation are safer due to his efforts and the everyday life-saving actions of 9-1-1 operators and first-responders.”

I play on the radio from 7 am -1 pm weekdays on 98.9 FM WYRZ and WYRZ.org. Follow me on twitter @WYRZBrianScott or e-mail me at brian@wyrz.org.
Previous Hendricks County Community Foundation Helps 20 Kids Attend Jameson Camp This Summer
Next IMPD officers and Indiana Parole agents seize sizable amount of meth on the city’s east side