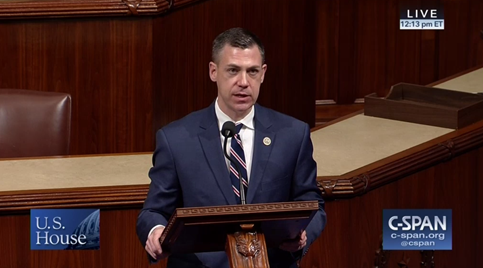 “During a town hall meeting in Fort Wayne last week, a constituent raised the issue of homelessness among female veterans,” said Banks. “This legislation is one way we can help all veterans who have families and ensure that female veterans have more access to services during times of hardship. As a nation, we need to ensure that keeping veterans and their families together is a top priority.”

Currently, the VA does not have the statutory authority to provide reimbursements for the costs of services for minor dependents of homeless veterans. A Government Accountability Office (GAO) report found that this led to a financial disincentive for providers, and in turn, limited housing for veterans and their children. This disproportionately affects the female veteran population. The Homeless Veteran Families Act, introduced by Representatives Mike Coffman (R-CO) and Julia Brownley (D-CA), would allow reimbursement to GPD providers at a 50 percent rate for the costs of housing minor dependent(s) of homeless veterans while the veteran receives services from the grant recipient.

I play on the radio from 7 am -1 pm weekdays on 98.9 FM WYRZ and WYRZ.org. Follow me on twitter @WYRZBrianScott or e-mail me at brian@wyrz.org.
Previous Donnelly-Supported Legislation to Protect Amateur Athletes from Sexual Abuse Passes House
Next Indiana State Police to escort Bicknell soldier home