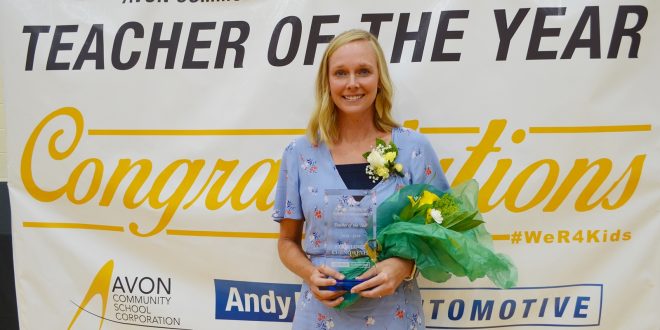 Mrs. Chenoweth has taught Geography, U.S. History and History of the World at AHS for 15 years. The Butler University graduate received the Golden Apple Award in 2018, Seniors’ Choice Award in 2010 and the Rising Star Award in 2009.  Mrs. Chenoweth mentioned that one of her goals as a teacher and coach is, “To cultivate positive relationships with students and colleagues giving clear expectations to create an active learning environment for all students.”

In addition to a generous cash gift and crystal award, Mrs. Chenoweth will receive a cash award from the Sharon Pinnick Educational Fund, (Hendricks County Community Foundation), a floral arrangement and a membership at the Hendricks Regional Health YMCA.

The other candidates (who were previously selected as their schools’

Avon Community School Corporation submitted Mrs. Chenoweth’s impressive portfolio to the Indiana Department of Education for the state’s selection process of the Indiana Teacher of the Year award.

Avon Community School Corporation (ACSC) is committed to providing an enriched learning environment which prepares students for their futures.

I play on the radio from 7 am -1 pm weekdays on 98.9 FM WYRZ and WYRZ.org. Follow me on twitter @WYRZBrianScott or e-mail me at brian@wyrz.org.
Previous Local Avon Student Awarded Scholarship
Next This Week at the Brownsburg Farmers Market