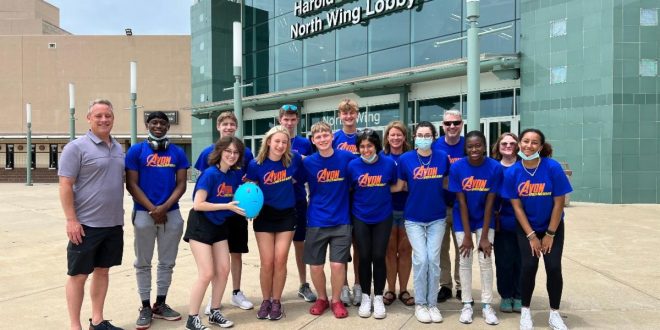 In two short years, the Avon High School Speech and Debate team has grown from 10 participating Avon students to over 70 students, despite COVID restrictions. The growth of the high school speech team has addressed important needs at Avon High School, including: 1) providing important extra-curricular activity for a growing student body; 2) the opportunity for students of varied interests (ranging from those with passions for broadcasting, poetry, current events, and theatric interpretations, for example) to coalesce as a single team; and 3) a platform to overcome one of the greatest human fears – the fear of public speaking – and then excel at public speaking.

The team enjoyed considerable success this year, bringing home trophies and accolades from all 15 tournaments. For the first time in school history, eleven Avon High School students qualified to compete at the national tournament, which was held in-person from June 12-17, 2022 in Louisville. According to Coach Linda Langford, “achieving qualification is highly regarded and impactful to the students’ futures. Qualifying for this national tournament means that these eleven students are in the top 5% of all speech and debate high school students nationwide.”

The talented team was excited to compete with schools from across the nation but to demonstrate that talent, the cost was about $1,000 per student to attend. The team was fortunate to have raised a portion of the total $10,500 needed through school and parent contributions, service club and private donors. Additionally, a donation of $1500.00 from the Avon Chamber of Commerce Fund, a fund of the Hendricks County Community Foundation, was instrumental to reaching the team’s goal. Langford remarked, “The donation from this HCCF fund was a true gift because it allowed our students to focus on preparing for the tournament in the final weeks before competing instead of trying to raise more funds. The team is grateful for this generous donation and support of our program and hopes to make Hendricks County proud of them.”

I play on the radio from 7 am -1 pm weekdays on 98.9 FM WYRZ and WYRZ.org. Follow me on twitter @WYRZBrianScott or e-mail me at brian@wyrz.org.
Previous DUI Traffic Stop Leads to Police Pursuit and Fatal Crash
Next Indiana Department of Education Presents Analysis of COVID-19 Academic Recovery & 2022 Assessment Results