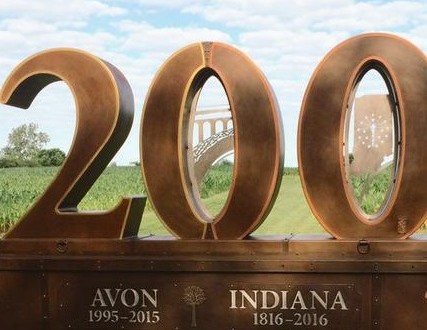 HENDRICKS COUNTY, November 3, 2015 – A Hendricks County project was among 76 Bicentennial Legacy Projects approved by The Indiana Bicentennial Commission during its October meeting at the Indiana State Library.

The Town of Avon has commissioned a metal sculpture with the number “200” to celebrate the state’s Bicentennial and the town’s 20th anniversary. The sculpture honors Indiana artist Robert Indiana, who designed many sculptures. The sculpture is 12 feet high and 14 feet wide. The front of the sculpture says “Avon 1995-2015 and Indiana 1816-2016” A tree with a cardinal will be engraved on the base.

The sculpture has been installed at Town Hall Park along the lake trail, and residents are encouraged to get their picture taken with the sculpture and post it to social media with #avon200sculpture. Residents can climb on the sculpture for the picture.

This latest Legacy Project is the fourth Hendricks County project endorsed by the state’s Bicentennial Commission. Previous projects to receive endorsement include:

If your organization would like to create a Legacy Project for the Bicentennial, please contact your local county coordinator, Josh Duke, at josh@visithendrickscounty.com. Legacy Project applications are considered for approval at every meeting of the Indiana Bicentennial Commission. To seek state endorsement for a proposed Legacy Project, go to www.Indiana2016.org for more information or to download an application.

About the Indiana Bicentennial Commission

The Indiana Bicentennial Commission is a fifteen-member body, chaired by Becky Skillman and Lee Hamilton, charged with overseeing the planning and execution of a statewide celebration for Indiana’s 200th birthday. Indiana’s 2016 Bicentennial celebration aims to honor our state’s 200 years of history, but do so in a way that engages all 6.5 million Hoosiers and leaves a lasting legacy for future generations. The commission encourages every community in Indiana to take part in this unique celebration. Visitwww.indiana2016.org to learn more about Indiana’s bicentennial history in the making.

I play on the radio from 7 am -1 pm weekdays on 98.9 FM WYRZ and WYRZ.org. Follow me on twitter @WYRZBrianScott or e-mail me at brian@wyrz.org.
Previous Donnelly Statement on Senate Consideration of His Bipartisan Legislation to Improve “Waters of the U.S. Rule”
Next Donnelly: Senate Should Act to Clarify Coverage of Clean Water Act, Will Continue Pushing For a Bipartisan, Permanent Solution