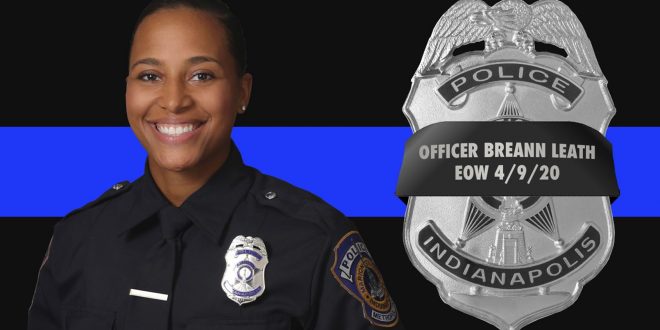 INDIANAPOLIS – Today, the Bureau of Alcohol, Tobacco, Firearms, and Explosives (ATF), the Indianapolis Metropolitan Police Department (IMPD), and the U.S. Attorney’s Office for the Southern District of Indiana announced a new initiative aimed at reducing domestic violence in Indianapolis. The Law Enforcement Action to Halt Domestic Violence Against Men, Women, and Children (LEATH) initiative is named after fallen IMPD Officer Breann Leath, a 2.5-year veteran of the department who lost her life to gunfire in April while responding to a call for help from a domestic disturbance.

“Officer Leath was an exceptional woman and law enforcement professional, who was taken from her family, friends, colleagues, and community far, far too soon,” said Roland H. Herndon, Jr., Special Agent in Charge of ATF’s Columbus Field Division. “The LEATH Initiative is our attempt to memorialize her, continue her work to aid victims of domestic violence, and to protect the law enforcement officers who are put in harm’s way responding to domestic disturbance calls. Keeping firearms out of the hands of individuals with prior domestic violence convictions will make our whole community a safer place.”

The LEATH initiative will aim to identify domestic violence offenders who are found to commit a crime with an illegally-possessed firearm, targeting them for federal prosecution. The effort will identify individuals with a history of domestic violence:

Federal law prohibits serious violent felons and individuals with previous misdemeanor crimes of domestic violence from possessing firearms or ammunition. A federal conviction for an individual with a previous misdemeanor domestic violence conviction who is found to have illegally-possessed a firearm carries with it up to 10 years in federal prison.

“While the level of domestic violence in our neighborhoods this year is not unique to Indianapolis, it is nonetheless unacceptable, and our officers remain committed to addressing it,” said IMPD Chief Randal Taylor. “Officer Breann Leath always went above and beyond in her service to others. It is only fitting that an initiative named in her honor will provide our officers with the tools to better serve survivors of domestic violence and ensure those who sought to victimize them are held accountable.”

The LEATH initiative also aims to support domestic violence survivors, coordinating victims and witness services in partnership with local, state, and community-based social service agencies. The program joins ongoing efforts to address domestic violence in the Indianapolis community, including a partnership between the City and the Domestic Violence Network to provide safe housing for survivors during the COVID-19 pandemic.

“Domestic violence abusers who have access to firearms are five times more likely to kill their partners than those who do not have access to a firearm,” said United States Attorney Josh Minkler. “Federal law makes it unlawful for domestic abusers to buy, possess or use firearms. Vigorously enforcing those laws is a common sense solution aimed at saving lives.”

I play on the radio from 7 am -1 pm weekdays on 98.9 FM WYRZ and WYRZ.org. Follow me on twitter @WYRZBrianScott or e-mail me at brian@wyrz.org.
Previous Construction is underway on a new traffic signal on State Road 267 at County Road 1000 North
Next Visit Indiana’s The 20 IN 20; Wineries