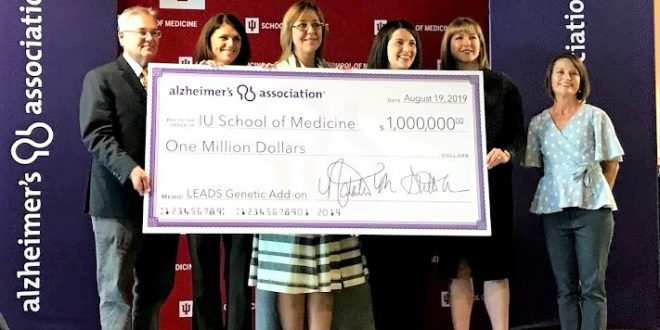 Indianapolis, IN – August 19, 2019 – The Alzheimer’s Association Greater Indiana Chapter today announced it is funding a $1 million add-on study focusing on genetics to the Longitudinal Early-onset Alzheimer’s Disease Study (LEADS) led by Indiana University School of Medicine. The additional funding will allow researchers to study the entire genome of all 600 participants to better understand the role of genes in the development of the disease. While genetic information will be gathered from participants at sites across the country, all of the genetic analysis will take place at IU School of Medicine.

“We are thrilled to be part of this groundbreaking research taking place right in our own backyard,” said Natalie Sutton, executive director of the Alzheimer’s Association Greater Indiana Chapter. “We provide support to individuals with younger-onset Alzheimer’s and their families, and we know how devastating the diagnosis is. It is an honor to support and partner with these researchers who are investigating such an important topic.”

Alzheimer’s disease is considered early- or younger-onset if it affects an individual below age 65. Many are in their 40s and 50s at the time of their diagnosis and may still be working, raising children and even serving as caregivers themselves. It is distinguished from early stage Alzheimer’s disease, which can occur at any age and refers to a step in the progression of the disease. No matter when it is diagnosed, Alzheimer’s disease is fatal. Of the top 10 causes of death in American adults, it is the only one that cannot be prevented, slowed or cured.

LEADS is the largest, most comprehensive study of individuals with younger-onset Alzheimer’s disease. Led by principal investigator (PI) Liana G. Apostolova, M.D., Indiana University School of Medicine, and several co-PIs, including Alzheimer’s Association Chief Science Officer Maria Carrillo, Ph.D., the groundbreaking study aims to increase knowledge of the disease’s onset and progression. Because individuals with younger-onset Alzheimer’s have not yet experienced changes in the brain associated with normal aging, studying them could help lead to breakthroughs for all forms of dementia.

“There is much we still don’t know about how Alzheimer’s develops, especially the younger-onset form of the disease, and this research could hold the key to helping prevent Alzheimer’s, developing effective treatments and even moving us closer to finding a cure,” said Liana G. Apostolova, MD, IU School of Medicine professor and the lead researcher on the study. “The potential findings from this add-on study are enormous, and we are grateful to the Alzheimer’s Association for making this possible.”

The $1 million grant is the Greater Indiana Chapter’s largest-ever investment in research. It was made possible by individual and corporate donations and through fundraisers, including the Alzheimer’s Association’s signature event, the Walk to End Alzheimer’s, which takes place in 12 locations throughout the Chapter area and more than 600 locations nationwide each September and October.

“Our events fund our programs and services so they are available to anyone who needs them, free of charge. But we know our constituents are just as committed to finding a cure,” continued Sutton, “At every Walk to End Alzheimer’s there is a promise garden with colorful flowers indicating how each participant is affected by the disease, including one white flower to represent the first survivor. We believe the first survivor of Alzheimer’s disease is out there, and making that possible is what we are striving for with this research grant.”

To learn more about the LEADS study, visit alz.org/leads.

About the Alzheimer’s Association

The Alzheimer’s Association is the leading voluntary health organization in Alzheimer’s care, support and research. Our mission is to eliminate Alzheimer’s disease through the advancement of research; to provide and enhance care and support for all affected; and to reduce the risk of dementia through the promotion of brain health. Our vision is a world without Alzheimer’s®. Visit alz.org or call 800.272.3900.

About Indiana University School of Medicine

IU School of Medicine is the largest medical school in the U.S. and is annually ranked among the top medical schools in the nation by U.S. News & World Report. The school offers high-quality medical education, access to leading medical research and rich campus life in nine Indiana cities, including rural and urban locations consistently recognized for livability.

I play on the radio from 7 am -1 pm weekdays on 98.9 FM WYRZ and WYRZ.org. Follow me on twitter @WYRZBrianScott or e-mail me at brian@wyrz.org.
Previous Dekalb County man drowns in private pond
Next Indiana DCS hosts conference for resource, adoptive parents