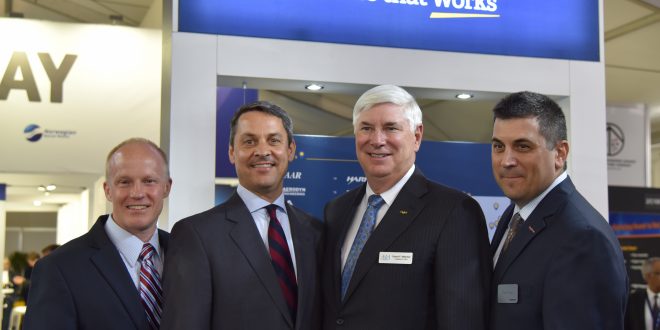 FARNBOROUGH, England – Today at the 2016 Farnborough International Airshow (FIA), the Aerospace Industries Association (AIA) announced plans to host its Supplier Management Council conference in Indianapolis in the spring of 2018. Presented in partnership with Rolls-Royce and the state of Indiana, the conference will attract industry leaders and showcase Indiana’s growing aerospace and aviation industry.

“Aerospace has taken flight in Indiana,” said Governor Mike Pence. “With the recent growth from companies like Rolls-Royce, GE Aviation, Raytheon and Alcoa, Indiana is soaring as an aerospace industry leader. Thousands of Hoosiers work in the industry today, a number which only continues to climb with increased visibility for our state at events like the Farnborough International Airshow and the Aerospace Industries Association conference. Today’s news is further evidence of Indiana’s advancing aerospace industry, and we look forward to hosting the Aerospace Industries Association and its members here in the Hoosier state as we work to attract even more jobs to Indiana.”

AIA is a leading aerospace trade association, representing more than 300 of the nation’s major aerospace and defense manufacturers and suppliers. The conference, which is held three times each year, will bring together industry partners in Indianapolis, providing a backdrop for companies to stay updated on the latest industry innovations and develop new business relationships.

“The partnership we’re announcing today among Indiana, Rolls-Royce and AIA is a great example of what can happen when industry and government work together to identify opportunities for smart growth and economic development, bringing highly skilled and high-payer aerospace manufacturing jobs to Indiana,” said David. F. Melcher, president and chief executive officer of AIA. “We are particularly proud today to recognize Indiana as the first state to partner with AIA and one of our member companies to host a Supplier Management Council meeting. This is a major step forward in our efforts to convene large and small companies to enhance opportunities for our industry and the communities that support them, and we hope other states and companies soon come forward with similar arrangements.”

Today’s announcement was made from the Indiana booth at FIA in the United Kingdom, as a delegation of Indiana business, education and economic development leaders are attending the airshow. Global aerospace business executives and industry leaders were in attendance today at the booth during the announcement to learn more about the Hoosier state.

FIA is the world’s largest exhibition dedicated to the aviation industry and alternates annually between London and Paris. More than 100,000 trade visitors and more than 1,500 exhibitors from 39 countries attended FIA in 2014, providing an ideal opportunity for Indiana to highlight its many advantages for doing business. Governor Pence led a jobs and economic development mission to the U.K. in 2014, where he attended the airshow and met with executives from the world’s leading aerospace companies.

“Indiana’s business climate is propelling growth and innovation for aerospace companies large and small, and we’re proud to share our story as a state that works at the Farnborough International Airshow,” said Victor Smith, Indiana Secretary of Commerce. “This week our Indiana delegation is having meetings with job creators from the aerospace industry around the world, discussing our state’s affordable business climate, world-class universities and hardworking workforce of engineers and other aerospace professionals. We’re hearing great things from industry leaders who have descended here in Farnborough, and look to bringing this continued momentum back to the Hoosier state.”

As part of the economic development mission to the airshow, members of Indiana’s delegation to FIA are participating in two roundtable discussions hosted by the AIA and a reception with more than 800 industry leaders at the U.S. Ambassador to the U.K.’s residence in London. The delegation is also meeting with executives from some of the world’s most influential aerospace companies, including Rolls-Royce, GE Aviation, Alcoa, Raytheon and Praxair, which also operate facilities throughout Indiana.

“Aerospace companies like Rolls-Royce rely on firmly-established, superior relationships with their supply chain partners. These connections are even more critical to us today as we invest nearly $600 million in modernizing our Indianapolis manufacturing operations and new technology research,” said Phil Burkholder, president of Defense Aerospace at Rolls-Royce North America. “We’re honored to join forces with the state of Indiana and AIA to host the spring, 2018 Supplier Management Council meeting.”

Hoosier companies attending the airshow as part of the economic mission include Indianapolis-based DIVSYS International, Applied Composites Engineering and Aerotonic; Jeffersonville-based Key Electronics and Shirley-based Tech Castings. While at the show, Aerotronic announced the launch of its new unmanned, electric helicopter, which has the ability to carry multiple sensors in a fully-enclosed bay.

In addition to the Indiana-based aerospace companies, the Purdue Research Foundation is attending as part of Indiana’s delegation, where it is promoting its new Purdue Research Park Aerospace District. Several economic development organizations are also part of the delegation, including the Indiana Aerospace and Defense Council, the Northeast Indiana Regional Partnership and the Greater Lafayette Commerce. Real estate firm Holladay Properties is attending to promote the Indianapolis Airport Authority’s initiatives to drive economic growth around the state’s largest airport.

This week’s economic development mission continues ongoing advancements in Indiana’s aerospace industry. Within the last two years, the Institute for Advanced Composites Manufacturing Innovation, the Purdue Research Park Aerospace District and the Battery Innovation Center in Greene County have all partnered with the state to spur continued aerospace research and development throughout the state. Just last month, the University of Notre Dame opened a new turbomachinery research facility in South Bend, which will conduct research and test the performance of new gas turbine engine technology used by commercial and military aircrafts, power plants and the oil and gas industries.

As a global aerospace leader, 82 aerospace companies operate across Indiana and employ more than 6,880 Hoosiers. Over the last two years, leading aerospace businesses including Alcoa, BAE Systems, GE Aviation, Raytheon and Rolls-Royce have announced plans to invest more than $900 million into Indiana and create more than 1,200 new Hoosier jobs. The state’s aircraft and spacecraft exports have increased at an average annual rate of nearly 30 percent since 2002.

I play on the radio from 7 am -1 pm weekdays on 98.9 FM WYRZ and WYRZ.org. Follow me on twitter @WYRZBrianScott or e-mail me at brian@wyrz.org.
Previous Byway Brewing Co. Sweeps 18th Indiana Brewers’ Cup
Next Governor Pence selects Hendricks County’s Jade Palin among various Boards and Commissions Appointments