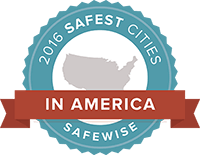 Zionsville, IN among the 100 safest cities in America by 2017 SafeWise Report

SafeWise is happy to announce the release of our 4th annual 100 Safest Cities in America Report. Zionsville, Indiana ranked in the top 100 safest cities in the nation!

Here is all the information you’ll need to cover this positive story:

What? SafeWise announced the 100 Safest Cities in America for 2017.

How/When? SafeWise released its 100 Safest Cities in America on April 3, 2017. To compile this report, SafeWise analysts considered the most recent complete FBI crime data from 2015 to rank these cities, which all have a minimum population of 10,000 people.

Who is SafeWise?  SafeWise is a home security and safety brand committed to increasing safety education, awareness, and preparedness in American communities. SafeWise has been recognized by The Huffington Post, Angie’s List, US News, Mashable, and many other reputable publications, for their Home Security Brand Comparisons and safety reports.