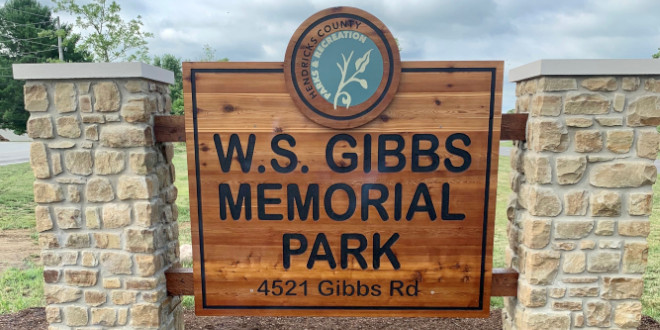 W.S. Gibbs Memorial Park is a 70-acre facility located within the town limits of Avon, although its official address is 4521 Gibbs Road in Danville. The Grand Opening ceremony will take place at the Bluegill Shelter near large two ponds totaling over 5 acres in size. It is free to attend, and the public is welcome to attend.

Beginning July 21, the park will be open from dawn to dusk daily, and admission is free of charge.

A large ADA-accessible fishing dock will be installed on one of the two ponds later this summer, and the ponds will be stocked with fingerlings by the Indiana Department of Natural Resources (DNR) Division of Fish & Wildlife later in the year, which will eventually allow anglers to fish the ponds and keep their catches while abiding by DNR rules and regulations.

The nature-themed playground has two sets of equipment – one designed for 2- to 5-year-olds and the other designed for 5- to 12-year-olds. A nature play area will be constructed in coming months behind the playground area.

Bluegill Shelter is 24 by 44 feet in size and sits on a concrete pad. An ADA-accessible concrete walkway leads from a paved ADA-accessible parking lot. The shelter includes picnic tables and a large mounted grill.

On the north side of the property in the middle of 20 acres of woods is the Firefly Shelter, a 20-by-36-foot pavilion on a concrete pad with an ADA-accessible concrete walkway from a paved parking lot. It includes picnic tables and a large mounted grill.

Both pavilions will be available for daily rentals beginning August 2.

Designed by Civil Engineering Consultants out of Greencastle and constructed by John Hall Construction out of Plainfield and HCP&R’s maintenance crew, W.S. Gibbs Memorial Park is opening almost exactly a year after its Groundbreaking Ceremony. HCP&R also worked closely with the Hendricks County Disc Golf Club to design and install the 18-hole disc golf course.

More information about W.S. Gibbs Memorial Park can be found at HendricksCountyParks.org.

I play on the radio from 7 am -1 pm weekdays on 98.9 FM WYRZ and WYRZ.org. Follow me on twitter @WYRZBrianScott or e-mail me at brian@wyrz.org.
Previous State Road 267 will close Thursday just south of County Road 1000 North
Next Brownsburg Taps Geans, Cook to be Co-Interim Town Managers