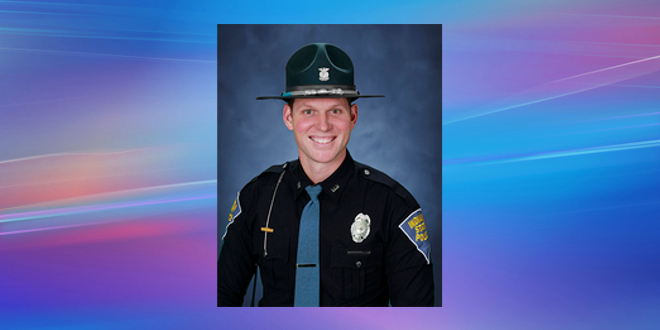 Indianapolis, IN – Trooper Cameron Bottema was recognized by Superintendent Douglas Carter during an awards ceremony held Friday at the Indiana Government Center for his outstanding DUI enforcement efforts.

Trooper Cameron Bottema, a 2 1/2 year state police veteran, patrols the overnight hours in the Indianapolis area with a focus on catching intoxicated drivers. In 2017 Bottema arrested 233 drunk drivers. He also made dozens of arrests resulting in 457 criminal charges and investigated 55 vehicle crashes.

Trooper Bottema was awarded the “DUI Life Award” which is given to the highest number of DUI arrests each year statewide. He was given a plaque and a medal to wear on his uniform.

I play on the radio from 7 am -1 pm weekdays on 98.9 FM WYRZ and WYRZ.org. Follow me on twitter @WYRZBrianScott or e-mail me at brian@wyrz.org.
Previous Secretary of State Connie Lawson reminds voters to request Absentee Ballot by April 30
Next ISP Bloomington Troopers stay busy during “The World’s Greatest College Weekend”