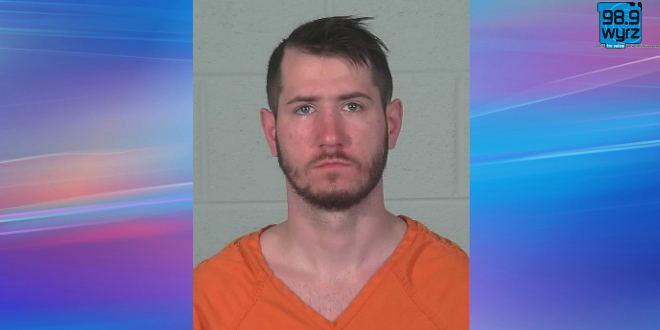 (Steuben County, IN)- Early yesterday morning at approximately 1:40AM, Indiana State Trooper Ben Walker was patrolling on Interstate 69 in the area of the 340 mile marker (south of the Ashley / Hamilton exit) in Steuben County, where he observed a 2013 Ford Taurus passenger car traveling at 110mph.

After nearly eight miles just to catch up, Trooper Walker observed continued erratic driving behavior.  The Taurus swerved from lane to lane, ran off the roadway, slowing down and speeding up- with speeds ranging from 112mph, to 74mph, and back up to 110mph. Trooper Walker luckily was able to get this erratic driver stopped near the I-69 351mm (Lake James exit area) without catastrophic incident.

Trooper Walker’s initial contact with the driver, NICHOLAS SAJECKI, 26, of Coldwater, Michigan, quickly revealed obvious signs of suspected alcohol impairment. After a thorough roadside investigation, Trooper Walker transported SAJECKI to the Steuben County Jail for further testing. SAJECKI remained less than cooperative throughout the Trooper’s investigation, but ultimately was placed under arrest for several alcohol and other related offenses. He was incarcerated at the Steuben County jail where he remains pending an initial hearing on the matter.

2) Operating While Intoxicated, A Misdemeanor

4) Operating While Suspended, A Misdemeanor

Trooper Walker was assisted during his investigation by Trooper Adam Kitson, and at the scene by Country Side Towing Service.

*All criminal defendants are to be presumed innocent until proven guilty in a court of law.

I play on the radio from 7 am -1 pm weekdays on 98.9 FM WYRZ and WYRZ.org. Follow me on twitter @WYRZBrianScott or e-mail me at brian@wyrz.org.
Previous Gov. Holcomb Signs Executive Order Extending BMV Deadlines
Next DOR Announces Additional Filing and Payment Extensions