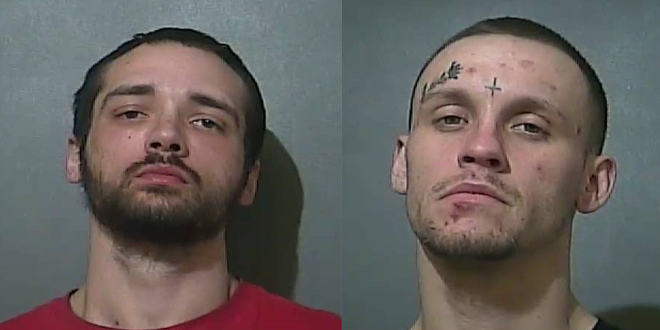 Vigo County – January 13, 2020 at approximately 11:30 p.m., Trooper Gerald Stump was patrolling in the area of Locust Street and Lafayette Avenue, when he stopped a 1997 Mercedes for an equipment violation.  The driver was identified as Nathaniel J. Hoctor, age 28, of Terre Haute, IN.  Criminal activity was detected and a search of the vehicle was conducted.  Trooper Stump located drug paraphernalia and a homemade pipe bomb.  The Indiana State Police Emergency Ordnance Disposal (EOD) team was immediately contacted.   Additional troopers from the Putnamville Post arrived on scene and secured the area for public safety.  Once the EOD team arrived, they took possession of the homemade pipe bomb and disposed of it.  Further investigation by Trooper Stump also revealed that Hoctor displayed signs of impairment.  Hoctor was offered the opportunity to submit to a certified chemical test, but refused.

Further investigation revealed that a passenger in the vehicle, Levi Gillis, age 28, of Clinton, IN, was wanted out of Vigo County on an active warrant on several charges (see below).

Both Hoctor and Gillis were taken into custody and transported to the Vigo County jail where they are currently being detained.

I play on the radio from 7 am -1 pm weekdays on 98.9 FM WYRZ and WYRZ.org. Follow me on twitter @WYRZBrianScott or e-mail me at brian@wyrz.org.
Previous FSSA offers additional guidance to Hoosier parents and providers on child care options
Next Gov. Holcomb Announces Additional Actions to Help Public Respond to COVID-19