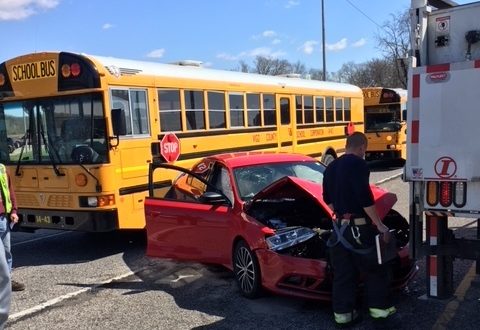 Preliminary investigation revealed three Vigo County School Corporation buses were stopped in the driving lane of northbound Fruitridge Avenue at the railroad tracks, as required by Indiana law, when carrying passengers. Daniel T. Page, age 30, of Dugger, IN. was operating a white 2008 Ford service truck, westbound across the northbound lanes of Fruitridge Avenue from a service road. Page was attempting to make a left turn to proceed south on Fruitridge Avenue. In doing so, Page pulled into the path of a northbound 2016 Volkswagen Jetta, in the passing lane, and driven by 17-year-old Leann R. Bealmear of Terre Haute, IN. The Volkswagen collided with the left front of the Page truck and then spun into the driver’s side of a 2015 International school bus, driven by 57-year-old Lorri A. Ugo of Terre Haute, IN. Troopers are looking into the possibility that Page may have been waved across by one of the school bus drivers.

Leann Bealmear and her passenger,16-year-old Madeline Tate of Terre Haute, IN. were transported by Terre Haute Fire Department paramedics to Union Hospital for complaint of pain.

Daniel Page was not injured and the truck was owned by Indiana Railroad.

The Vigo County School Corporation bus was transporting (13) high school age students. One student complained of pain, but was not transported for treatment at time of the crash. The students were transported by another bus, back to Terre Haute North High School. Various administrative school personnel were on scene to assist. The bus appeared to not have any damage, but by Indiana law, will be inspected by Indiana State Police Commercial Vehicle Enforcement troopers tomorrow.

I play on the radio from 7 am -1 pm weekdays on 98.9 FM WYRZ and WYRZ.org. Follow me on twitter @WYRZBrianScott or e-mail me at brian@wyrz.org.
Previous Donnelly Welcomes $10.9 Million Federal Grant to Combat Opioid Epidemic
Next Prison Inmates Raise Funds for Indiana Sheriffs’ Youth Ranch