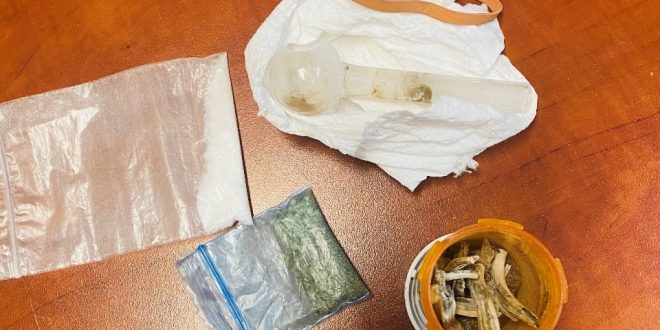 Sullivan County – Friday, April 1, 2022, at approximately 11:42 p.m., Trooper Austin Robertson was patrolling on State Road 54 near County Road 525 East when he attempted to stop the driver of a motorcycle for traveling at a speed of 100 MPH.  The driver failed to stop once Trooper Robertson activated all of his emergency lights on his patrol car and continued westbound on State Road 54.  The driver of the motorcycle traveled through the city of Sullivan violating several traffic laws, traveling through local yards, and continuing to travel at a high rate of speed.   The pursuit came to an abrupt stop at County Road 200 East and County Road 150 North when the driver lost control of the motorcycle hurtling into a ditch and crashing.

The driver of the motorcycle attempted to leave the scene, but this is when Trooper Robertson, without hesitation, got out of his patrol car and gave loud verbal commands for the driver to stop, but the commands were disregarded, and Trooper Robertson pursued on foot.  A short time later, Trooper Roberston was able to physically secure the driver by placing him on the ground.  Deputy Boatright, of the Sullivan County Sheriff’s department, arrived on scene and provided the necessary assistance to place the driver into custody.  The driver was then identified as Jeffery L. Meier, age 59, of Sullivan, Indiana.  Meier showed signs of impairment and agreed to submit to a certified chemical test.  Those results are pending from the Indiana Department of Toxicology.   Further investigation revealed that Meier was in possession of a smoking pipe, methamphetamine, marijuana, and psilocybin mushrooms.  Once medically cleared from the Sullivan County Community Hospital, Meier was transported to the Sullivan County Jail without incident.

I play on the radio from 7 am -1 pm weekdays on 98.9 FM WYRZ and WYRZ.org. Follow me on twitter @WYRZBrianScott or e-mail me at brian@wyrz.org.
Previous 5-time GRAMMY® Award-winner Edgar Meyer guests with CSO for April 23 Masterworks 5
Next INDOT Announces Request for Information to Inform State Electric Vehicle Charging Infrastructure Deployment Plan