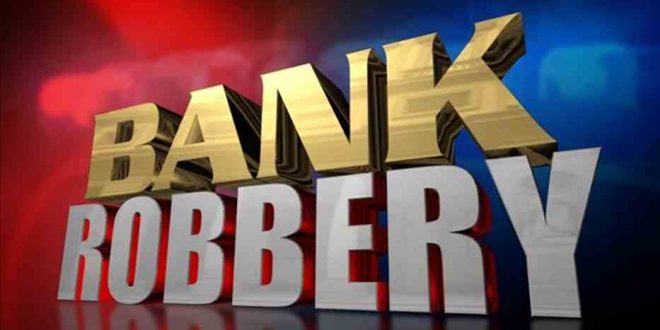 Sullivan County – Friday, at approximately 10:50 a.m., a male subject walked into the Fifth Third Bank in Sullivan, robbing the bank of an undisclosed amount of United States Currency.

The initial investigation by Master Trooper Detective Jason Schofstall and Senior Trooper BJ Patterson has revealed that the suspect is a black male, approximately 5 feet 8 inches tall, weighing approximately 150 pounds, with some facial hair and a large mark on the right side of his neck.  The suspect was wearing a dark colored t-shirt with “BE FREE” on the front, a tan ball cap, dark rimmed sunglasses, blue jeans, and white tennis shoes. The suspect handed the bank teller a note demanding cash.  The teller complied with the demands of the suspect.  No weapons were displayed at the time of the robbery.  After receiving the cash, the suspect left the building on foot, walking north away from the bank.

If anyone has information on the robbery or saw the suspect in the Sullivan area earlier in the day, please contact Detectives Jason Schofstall or  BJ Patterson of the Putnamville State Police Post at 1-800-742-0717.  Information can remain anonymous.

No one was injured during the robbery.  This is all the information that will be released at this time

I play on the radio from 7 am -1 pm weekdays on 98.9 FM WYRZ and WYRZ.org. Follow me on twitter @WYRZBrianScott or e-mail me at brian@wyrz.org.
Previous Hendricks County for Suicide Awareness and Prevention Month-September 2019
Next Body found on Lake Michigan Beach