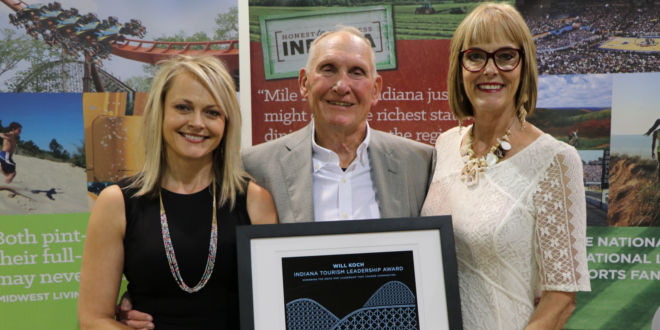 INDIANAPOLIS (August 16, 2019) – Lt. Governor Suzanne Crouch and the Indiana Office of Tourism Development (IOTD) announced today during the Hoosier Hospitality Awards that Cook Group Chairman of the Board, Steve Ferguson, is this year’s recipient of the Will Koch Indiana Tourism Leadership Award. The award announcement was part of the Lt. Governor’s annual Hoosier Hospitality Awards at the Indiana State Fair.

At the Cook Group, Ferguson is heavily involved with building restoration. Many of these projects have been in Bloomington, but the crown jewel was about a decade ago with the creation of French Lick Resort. Tourism traffic was growing sparse at French Lick Springs Hotel and the West Baden Hotel sat empty for over 70 years.

“Steve Ferguson revived the historic hotel property. He also hired legendary architect, Pete Dye, to design a championship golf course in the hills of the Hoosier National Forest and today, French Lick is one of America’s premier resort destinations,” Crouch said. “Ferguson’s dedication, leadership and passion are what it took to propel French Lick and our state to the Next Level in tourism and development.”

Ferguson was an accomplished man before this tourism project. He’s a former attorney. He served four terms in the Indiana House of Representatives. He’s a five-time winner of the Sagamore of the Wabash award and volunteers on several boards, but Ferguson puts the hotel renovations and the Pete Dye Golf Course number one on the list of his accomplishments.

The Will Koch Indiana Tourism Leadership Award is presented annually and is the highest tourism honor given by the state. The award is named for the late Will Koch, long-time owner and president of Holiday World & Splashin’ Safari. The Indiana Office of Tourism Development and the Koch family established the honor to pay tribute to Koch’s many meaningful contributions to tourism, business and society.

A video of this year’s Will Koch Indiana Tourism Leadership Award can be found here.

Crouch and IOTD also presented 15 representatives of the tourism industry the Hoosier Hospitality Award for their high level of service in tourism-related jobs at hotels, restaurants, attractions and other destinations.

“Our Hoosier Hospitality Award recipients represent the best of our state from the tourism industry,” said Misty Weisensteiner, director of IOTD. “These individuals dedicate their time and service to showcase to visitors and their communities what a great place Indiana is to work, live and visit.”

Nominations for Hoosier Hospitality Awards are submitted by community members and destination patrons and are reviewed and selected by IOTD. Outstanding service is a major factor in determining whether a person returns to an individual business or destination.

I play on the radio from 7 am -1 pm weekdays on 98.9 FM WYRZ and WYRZ.org. Follow me on twitter @WYRZBrianScott or e-mail me at brian@wyrz.org.
Previous Law for More Opioid Training in Effect
Next Indiana State Police K9 Kazik Retires