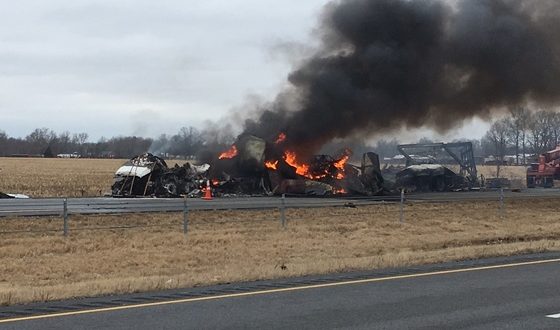 Jackson County-Wednesday morning, shortly after 4:30 am, the Indiana State Police responded to a personal injury crash on I-65 Southbound near the 43 mile marker.  As a result of the crash, a hazardous material spill and tractor trailer fire led to lanes of I-65 being closed for nearly seventeen hours.

The initial investigation by Trooper Korry Clark indicated that traffic was slowed in the area due to a previous crash that occurred on I-65 southbound near the 41 mile marker.  A Covenant Transport 2017 Freightliner pulling a box trailer driven by Uche J. Okpeh, age 30, Jacksonville, Florida was traveling in the right lane of I-65, approaching the stopped traffic at the 43 mile marker.  Okpeh’s vehicle struck the rear of a Land of Trucks Inc 2012 Freightliner pulling a box trailer driven by Vitali Kriuchkov, age 34, Orlando, Florida that was stopped in the right lane. The collision forced Kriuchkov’s vehicle into the rear of a Celadon Trucking Services 2015 Kenworth pulling a box trailer driven by Bobby L. Brand, age 46, Gadsen, Alabama.  A passenger in Okpeh’s vehicle, Senesie Kuyateh, age 39, Jacksonville, Florida was injured in the collision.  He was transported to Scott Memorial Hospital in Scottsburg, Indiana with injuries not believed to be life threatening.  None of the drivers were injured in the collision. 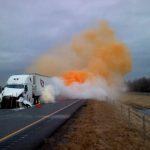 Okpeh’s vehicle was hauling hazardous chemicals when the crash occurred.  Some of the chemicals were believed to be a non-flammable gas, a corrosive liquid (weed killer), a caustic acid, an oxidizing solid (dantobrom), and a corrosive liquid (glutaradehyde).  As a result of the collision, some of the containers in the trailer were ruptured, causing the chemicals to spill inside the trailer and onto the road.  HazMat teams were called to the scene to begin cleaning up the crash.  All lanes of I-65 were closed due to the chemical spill.  Kriuchkov’s vehicle and Brand’s vehicle were both removed from the scene. 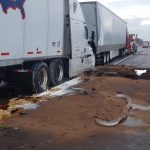 At approximately 10:45 am, crews that were removing containers from Okpeh’s trailer observed smoke and a volatile reaction taking place inside the trailer as a result of some of the chemicals combining during the crash.  The responders backed away from the vehicle.  The northbound lanes of I-65 were then shut down.  Officers went to homes within a half mile of the scene and warned residents of the situation.  The tractor trailer ultimately caught fire around 12:00 pm and became fully engulfed.  The vehicle burned until approximately 4:00 pm.  As a result of the fire, a vehicle belonging to Indiana Spill Response was also destroyed. 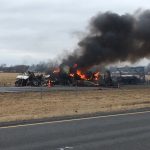 After the fire was extinguished, crews began cleaning up the scene.  The northbound lanes were opened at 4:00 pm.  The southbound lanes remained closed until 9:00 pm.  As a result of the fire, the asphalt on I-65 near the 43 mile marker was damaged.  Crews were able to make temporary repairs to the roadway until the Indiana Department of Transportation can make permanent repairs.

During the road closure, traffic was diverted off of I-65 to US 31.

The investigation is ongoing.  It is not known at this time if anyone will be charged or cited as a result of the incident.

I play on the radio from 7 am -1 pm weekdays on 98.9 FM WYRZ and WYRZ.org. Follow me on twitter @WYRZBrianScott or e-mail me at brian@wyrz.org.
Previous Homicide detectives requesting the communities assistance in Wednesday morning homicide
Next Sycamore Services announces grant from Lilly Endowment