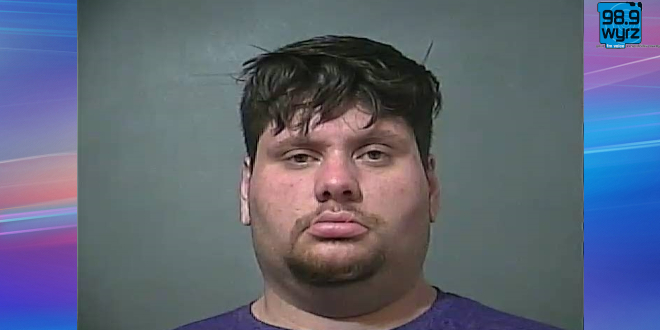 Vigo County – Tuesday, February 8, 2022, at approximately 10:30 a.m., Indiana State Trooper Andrew Mattern was patrolling on Jessica Drive when he observed a male riding a bicycle.  Trooper Mattern recognized the male to be Ronald Luci, age 28, of Terre Haute, Indiana, and that he had several active felony warrants, out of Vigo County, for his arrest.

Trooper Mattern used the PA loudspeaker on his commission to order Luci to stop.  Luci disregarded Trooper Mattern’s requests and turned onto Mews Drive in an attempt to elude him, riding his bicycle through a fenced in area covered in deep snow. Trooper Mattern then exited his patrol vehicle and started on foot in an attempt to catch up to Luci, all the while giving loud verbal commands to stop.  It was at this time that Luci lost control of his bicycle, due to the deep snow, and crashed, running away on foot. In his continued attempt to escape, Luci started dropping articles as he was running. Trooper Mattern was then able to catch up to Luci a short distance later and he was then taken into custody without further incident.  During a search of the area in which Luci had ran, several items were discovered that he had discarded, including methamphetamine.  Luci was taken into custody for the active warrants out of Vigo County and for pending charges.  He was transported to the Vigo County Jail where he is currently being detained on a $150,000 bond.

Under the law, criminal charges are merely accusations, and the defendant is presumed innocent unless and until proven guilty in a court of law.

I play on the radio from 7 am -1 pm weekdays on 98.9 FM WYRZ and WYRZ.org. Follow me on twitter @WYRZBrianScott or e-mail me at brian@wyrz.org.
Previous Lubbers Delivers Her Final State of Higher Education Address
Next Indiana Department of Education Provides Update on Indiana GPS Dashboard Development