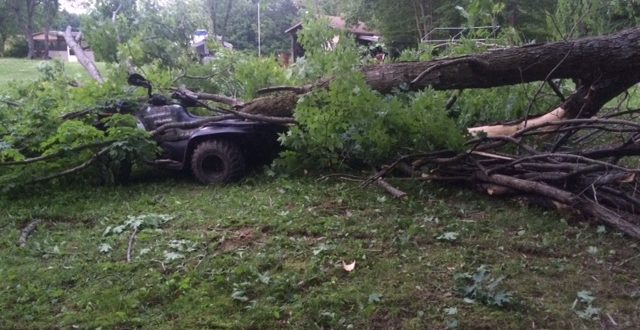 Indiana Conservation Officers are investigating an incident that claimed the life of a Shelbyville man this evening in Morgan County,

At approximately 7:37 p.m. this evening, First Responders were dispatched to the 3300 block of South Conservation Club Road in Morgantown reference a possible ATV accident.

Upon arrival, it was discovered that a large portion of a tree had fallen on Robert C. Blacker, 28, of Shelbyville, IN.  Responders were able to remove Mr. Blacker from under the tree and transport him to IU Health Morgan Hospital in Martinsville with blunt force trauma to the head and chest area.  Mr. Blacker was pronounced deceased at 8:21 p.m.

Initial investigation reveals that Mr. Blacker was visiting a friend and helping gather wood and limbs from the woods.  While pulling out a large bundle of limbs with the ATV, a portion of a large tree appeared to break and fall on top of Blacker.  It does not appear that Blacker was pulling on the tree that had fallen.  The cause of the falling tree is not clear at this time.

Blacker was not wearing a helmet or any other protective gear.

I play on the radio from 7 am -1 pm weekdays on 98.9 FM WYRZ and WYRZ.org. Follow me on twitter @WYRZBrianScott or e-mail me at brian@wyrz.org.
Previous Secretary of State Election Division sending out second round of postcards to continue voter list refresh
Next Indiana’s 317 Area Code Mandatory 10-Digit Dialing Starts in September