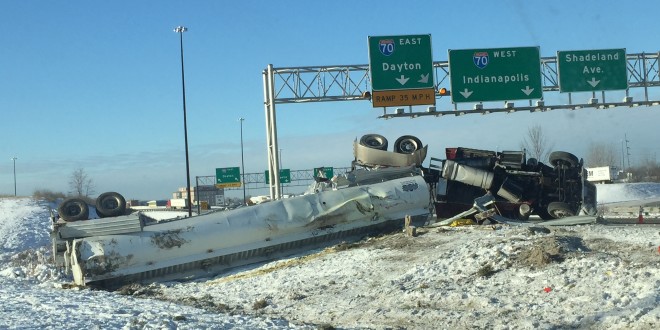 Indianapolis – A roll-over semi crash that occurred yesterday evening around 7:20 p.m. is still affecting traffic on the east side. A semi truck pulling a tanker trailer rolled over on I-465 south bound just before the entrance to I-70 on the east side. The tanker was loaded with 6500 gallons of motor oil, and that oil was leaking out of the tanker. The leak has been stopped, however the logistics of removing the product from the tanker has proven difficult. Recovery crews worked through the night in an effort to remove the wreckage. It was determined work should be halted through the morning rush hour to allow for the highest flow of traffic possible. The clean up resumed at 10 a.m. There is no time frame for the lanes to be re-opened at this time.

Southbound traffic on I-465 can still access I-70 east or west bound as well as Shadeland Avenue. Motorists wishing to exit onto I-70 should stay in the far right lane to avoid the lane closure. Traffic wishing to continue south on I-465 past I-70 should utilize the left two lanes to avoid the congestion.

The driver of the semi, Charles Jones of Kentucky, was not injured. He was driving a black 1997 Peterbilt. Jones told troopers he had swerved to miss a mattress and box spring that was in the roadway, hit some ice on the shoulder and slid out of control. There were no other vehicles involved in the crash.

I play on the radio from 7 am -1 pm weekdays on 98.9 FM WYRZ and WYRZ.org. Follow me on twitter @WYRZBrianScott or e-mail me at brian@wyrz.org.
Previous Indiana Office of Community and Rural Affairs Announces Downtown Enhancement Grant Application Availability
Next Coats Praises House Passage of STREAM Act