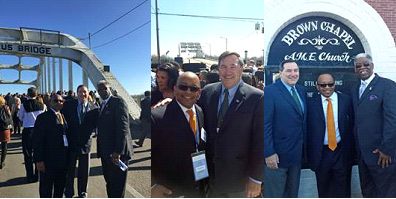 Indianapolis, Ind. — U.S. Senator Joe Donnelly announced his support for the bipartisan Voting Rights Advancement Act, which would restore voter protections that were undermined by the recent U.S. Supreme Court decision in Shelby County v. Holder. Today, March 21, marks the 51st anniversary of the beginning of Dr. Martin Luther King Jr.’s third march from Selma to Montgomery. Last March, on the 50th Anniversary of the marches, Donnelly participated in a civil rights pilgrimage in Alabama alongside civil rights leaders.

Donnelly said, “The right to freely cast a ballot is central to what it means to be an American and that right must be preserved and protected. We need to work together to ensure that Americans’ fundamental right to vote is not being denied on a discriminatory basis. We should be making it easier for Americans to participate in the voting process, not harder.”

The Voting Rights Advancement Act would amend the Voting Rights Act to require a state or political subdivision of a state to preclear changes to their election practices with the U.S. Department of Justice or U.S. District Court for the District of Columbia for a period of 10 years if that jurisdiction has a persistent record of voting rights violations in the previous 25-year period. The legislation would also require notice and disclosure of late-breaking changes in voting procedures when a federal-level election is involved. In addition, this bill would require all jurisdictions that enact specific voting changes that historically have been found to be discriminatory to be subject to federal preclearance for those changes.

I play on the radio from 7 am -1 pm weekdays on 98.9 FM WYRZ and WYRZ.org. Follow me on twitter @WYRZBrianScott or e-mail me at brian@wyrz.org.
Previous Hendricks Regional Health Secures Brownsburg Site for $48M Emergency Department and Comprehensive Outpatient Center
Next Governor Pence Signs Bill Adding Human Trafficking to Department of Child Services Statute